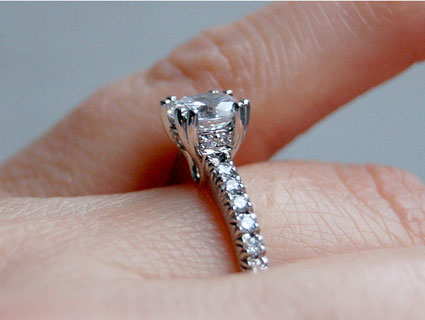 I’m in the middle of that period in your late 20s where it seems everyone you know is engaged to be married. I am one of those people: My fiance and I are getting hitched next June. For some reason, if you are heterosexual, it’s tradition in the United States to mark this occasion by having the male drop some crazy large sum of money on sparkly finger apparel.

The good feminist in me knows that the concept of an engagement ring is highly problematic, and as a human rights advocate and environmentalist I’m also pretty well aware of the host of other problems associated with mining the resources used in rings. Also, I’m marrying a graduate student, so extravagant bling isn’t really in our price range. But there’s still a part of me that really wants something shiny.

My fiance and I have spent quite a bit of time researching both diamonds and alternatives. It can be overwhelming. One of the things that surprised me most in talking about it with others, though, is a fairly wide belief among even our do-gooder-type friends that the problems with the diamond industry have pretty much been cleared up. That isn’t really true. So what follows is a list of things to consider if you’re in the same boat as I am.

Alternatives: It used to be considered odd for a couple to choose a non-diamond stone. But now that Kate Middleton is rocking a sapphire, it’s not that weird any more. There are a lot of other options out there to consider, including sapphires, emeralds, and pearls. They’re still lovely, and they don’t all come with the baggage of a diamond—they’re not as expensive, and people are less likely to have killed someone over them.

Of course, with any of these alternatives you will still want to make sure that the stone is ethically sourced. The first step is asking the jeweler where the stone originated. If they can’t tell you, you should probably reconsider buying it. If you’re having a hard time tracking the origin of a gem, you can also get lab-grown stones of many varieties these days.

Diamonds: Apparently people think that once the movie Blood Diamond came out in 2006, the world went ahead and fixed that problem. Not so much. Since 2003, major diamond producing and trading countries have used the Kimberley Process, an international system put in place to prevent the trade of diamonds that fund conflicts. The definition of “conflict diamond” used in the process, however, is fairly narrow, only covering diamonds used to fund rebel movements against governments that are recognized as legitimate by the international community.

Global Witness, an NGO that has monitored the diamond industry for years, notes that while the process has had some “notable achievements,” it hasn’t been as successful at addressing problems in diamond-mining countries like Zimbabwe, where government forces have been found running “torture camps” near mines. Other problem spots include Côte d’Ivoire and Venezuela. Global Witness also points out that the process could be improved by expanding the definition of human rights abuses condemned under the scheme and creating a formal infrastructure that can monitor and respond to crises.

I also talked to Beth Gerstein, the co-founder of Brilliant Earth, a company that is well respected for its efforts to sell diamonds that are ethically and environmentally sourced. She ended up in this business after having trouble picking an engagement ring back in 2004. Things have gotten at least a little better in the industry since then, Gerstein says, mostly because more customers are now asking for more information. “They didn’t think it mattered, that no consumer cared,” she says. “We were able to show that wasn’t the case.”

“Yes, this diamond may have had a bloody past, but that was 80 years ago,” says Earthworks’ Payal Sampat of recycled stones.

Brilliant Earth sources most of its diamonds from mines in Canada, where labor and environmental standards are high. It is also working with small-scale mines in Namibia and Botswana. Those mines are not only providing verified-origin diamonds, but they are also creating jobs in the source countries in cutting and polishing stones, instead of exporting the raw product as is often the case. Gerstein also likes the Diamond Development Initiative International, a group that’s working to support small-scale diamond operations around the world. There are also efforts underway to develop a kind of “fair trade” certification for diamonds, like there is currently for coffee, but that isn’t really up and running yet.

Gold: If you’re concerned about the environmental impact of your ring, the gold is probably the most worrisome part. Mining the gold for an average engagement ring band creates 20 tons of mine waste, says Payal Sampat, the international campaigns director at EARTHWORKS. That includes toxic waste like mercury and cyanide. EARTHWORKS has been leading a “No Dirty Gold” campaign that asks retailers to commit to buying ethically sourced gold. It put out a report last year about how companies have performed so far.

Sampat notes that the Initiative for Responsible Mining Assurance is working on developing fair trade standards for metals and gems, which could in the near future be good way to find jewelers that are doing due diligence in sourcing. Ethical Metalsmiths is one good place to find a jeweler currently, Sampat says.

Recycling: It’s also possible to find rings that are made with recycled metals and stones. Jewelers can reset older stones if you happen to have a spare diamond laying around. You can also look for jewelers that sell vintage or antique engagement rings. “Yes, this diamond may have had a bloody past, but that was 80 years ago,” Sampat says.

Then again, I also recently heard about friends of a friend who bought each other new glasses instead of an engagement ring. So there’s always that option.