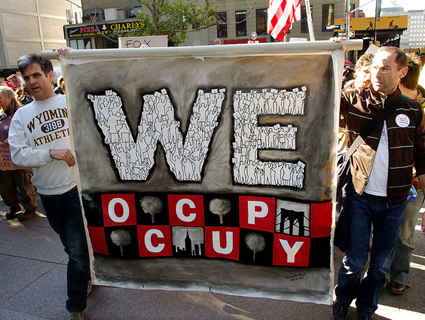 The Occupy Wall Street movement is so unlike the tea party movement in so many ways it’s almost worth dismissing the comparison entirely as a totally contrived media-generated narrative. Almost. But there is one key similiarity: Both groups have become, in the eyes of their opponents, a symbol for everything that’s wrong with American politics. They are their brothers’ punching bags. Which is why Occupiers and tea partiers sort of freak out when you make the comparison; it’s like being told to look in the mirror and finding out that you’ve suddenly sprouted three heads.

The protesters weren’t the number-one topic of discussion at the Values Voter Summit in DC—that would probably be President Barack Obama’s continued assault on American values. But the nationwide demonstrations were a recurring theme on stage and among the rank-and-file attendees. Over the course of the weekend, a consensus began to form about who these protesters were and what shadowy groups might be behind them.

Bonnie Borris and Lora Smith, middle-aged sisters from Los Angeles who I caught up with across from the Family Research Council booth, seemed to typify the views of the attendees. “It’s all, caused by the administration,” said Bonnie. “Rich against the poor,” said her sister Lora. “And funded by George Soros,” added Bonnie—”It’s a mob mentality. I really don’t know what they want,” “It’s a mob,” Lora agreed. “They did this in England,” said Bonnie. “They don’t work,” said Lora. “They don’t do work, they never have worked, and they think the world owes them everything,” said Bonnie.” “Fifty percent of people are not paying taxes.”

“What I’ve seen, they’ve only got about 300 nebulous objectives,” said Norman Shattuck of Boise. “The tea party’s very specific and well behaved if that’s the best way to put it, and these particular groups have caused a lot of problems, a lot of arrests. Most of the interviews on the streets I’ve seen, it’s kind of like. ‘It’s party time!’ They’ve decided that capitalism is the big deal and the big problem. And part of what they’re saying, and some of them have been specific about this is, ‘They’ve got theirs and we deserve some of it’—having done nothing to deserve it. They think the people who have worked all their lives to earn that have a responsibility to share it, or give it to them. Which I think is the direct opposite of how this country was founded.” He paused, and added, “I’m being polite, aren’t I?”

“I know there are left-wingers that want to take stuff away from people, from the Wall Street people, who only have stuff because the government gave it to them in the first place,” said Eugene Zumchak of Buffalo. “The idea that people who make money should give it to people who are unwilling to make money, that’s kind of a silly thing. The people screaming and yelling on Wall Street and saying profanities, are people who haven’t worked and aren’t willing to work. That’s the kind of mobs that they are. The mobs on Wall Street are unruly and potentially violent. They earned nothing and they deserve nothing.”

“If they start burning stores, start throwing Molotov Cocktails, you’ll see who they really all are.”

Josie DiRodio-Fitzergald of Maryland had a slightly more nuanced take. “I was on that side, I used to be SDS, so I understand all that,” said DiRodio-Fitzgerald, an undecided voter who’s leaning toward Rick Perry because “he’s accountable to God.” “It’s just been encouraged, it’s been hyped up. In other words, it’s on the Internet just like the other stuff that’s on the Internet—conspiracy theories. It’s not very practical to blame, you know, I don’t blame Barack Obama—you know I love the man!” They’re confused, in other words. Just like she used to be.

“I think it’s a mob; it is socialism gone mad,” said Bob Fischer. “I think the radical left is on its last gasp. They will leave power in dishonor in 2012. Just like they did in the 1960s. If they start burning stores, start throwing Molotov Cocktails, you’ll see who they really all are.”

And that, ultimately, is a theme the (mostly middle-aged or older) attendees of the Values Voter Summit kept coming back to: the protesters in Zuccotti Park are a mob, rabble, radicals, and, ultimately, willing to take by force what they cannot otherwise earn or obtain. They come from the same cloth as the rioters in England (although the Wall Street demonstrators have not rioted) and they’re representative of a generation that has no idea how to make it on its own. The kids are not alright, and as Herman Cain said, they’re coming for your Cadillac. “The violent left is coming to our streets, all of our streets, to smash, to tear down, to kill, to bankrupt, to destroy,” Glenn Beck told the audience in Sunday’s closing address, which was frequently interrupted by applause and standing ovations. “It will be global in its nature and global in its scope. I said these things two years ago, and I was mocked and ridiculed.”

Beck will be mocked and ridiculed now, too. But just as his warnings about creeping totalitarianism and black militarism supplied a delicious narrative for a conservative base coming to grips with its fall from grace, his narrative of a rioting mob of no-good kids, fueled by a globalist cabal, seems to hit the spot.