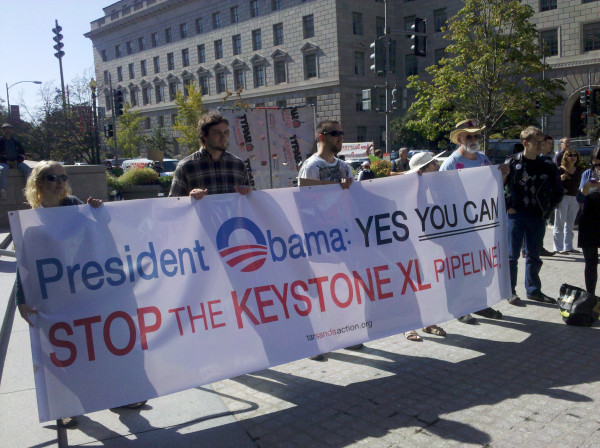 Friday’s public listening session on the Keystone XL pipeline was an unusual scene, a packed room of environmentalists and union members who were, in an unusual twist, mostly on opposite sides of the dispute. Several hundred union members showed up in bright orange and lime green T-shirts, in a show of support for the proposed 1,661-mile pipeline from Canada to Texas. Environmentalists were also out in force to urge the State Department to stop Transcanada, a Canadian energy company, from moving forward with the project.

For most of the unions represented there, it’s a question of jobs and how to make more of them. “People are struggling for jobs,” said Sean Moody, 29, a flagger with the Washington, DC Department of Transportation and a member of the Laborers’ International Union of North America, (LiUNA). “You have to survive, pay our bills and things like that.” There were probably more LiUNA members at the hearing than any other individual constituency—or at least their bright shirts helped them stand out from the crowd.

LiUNA and the United Association of Steamfitters and Plumbers have made a big show of support for the pipeline; along with the Teamsters, they’ve been the most important union support for approving the project. But other unions—like Transport Workers Union of America and the Amalgamated Transit Union—have come out against Keystone XL.

For many of the activists who showed up for the hearing on Friday, it was weird to be clashing with people who are allies on a number of other issues. “I’ve never been at a rally where I wasn’t standing on the same side as the union people,” said Molly Haigh, the communications coordinator with the group 350.org. “A lot of our long-term goals are the same, but corporations pit us against one another.”

Some of the union members seemed equally put-off by the situation. After a rally environmental groups held at noon outside of the Reagan building in downtown DC, I found James Foster, a 55-year-old electrician and union member wearing a LiUNA shirt*, sitting on the steps nearby. When I asked him whether there was going to be a similar union event, he responded that he didn’t plan on participating anyway. At least, not anymore. “I agree with the other side now,” said Foster. “I didn’t know this was an environmental issue.” He’d heard it was a protest for jobs, but, after listening to the pipeline’s critics testify Friday morning, he said he decided that “work that destroys the environment” isn’t worth it.

“A few bucks here and there isn’t going to help us for a lifetime, let alone the next generation,” said Foster. “If it’s going to hurt us in the long run, we don’t need to do it.”

A few feet away, several older women from the protest came over to talk to a 30-something man from the union. “I’m going to go home and do research,” he told them. “I’m an environmentalist at heart.” Elsewhere, a pair of earnest-looking young environmentalists were trying to talk to another handful of union members, who weren’t quite as eager to hear their appeals.

Inside the hearing, the majority of the testimony came from pipeline critics, at least in the first few hours. Members of the clergy, ranchers, Native American groups, and even Mike Richter, the former Rangers goalie and Olympian, made impassioned pleas to stop the pipeline. Representatives of rural electric cooperatives, oil companies, and some of the previously mentioned unions spoke in favor of its approval. State Department officials said they heard testimony from about 75 people at this, the last public hearing on the proposal before the department expects to make a decision. Members of the public can still submit written testimony until Oct. 9.

The Keystone fight has gotten a good deal of attention of late. Last month, protesters held two weeks of sit-ins outside the White House, urging President Obama to veto the proposal. And in the last few weeks, several rounds of emails between Transcanada’s head lobbyist and State Department employees were released, leading enviros to argue the government was colluding with company behind the scenes.

The State Department completed an environmental impact statement in late August. Officials are now considering whether the pipeline is in the national interest, and expect to issue a final decision by the end of the year. For more on the pipeline, see our map of the route and our backgrounder.

* Story has been corrected to reflect that while Foster was representing LiUNA at the event, he is a member of a a local chapter of the IBEW.