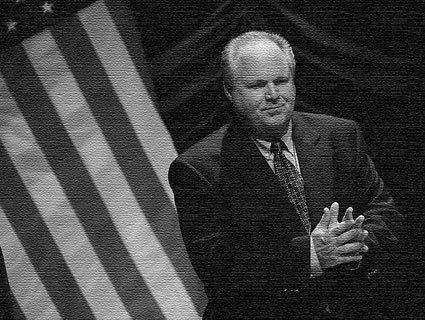 Rush Limbaugh set a new low for reactionary tribalism on Friday when he reflexively defended Joseph Kony and the Lord’s Resistance Army after hearing that President Barack Obama was sending a hundred U.S. troops to Uganda to assist in capturing or killing the warlord.

Following some (extremely) superficial Googling, Limbaugh surmised that the LRA were “Christians” who were “fighting the Muslims in Sudan” and therefore wonderful people. In fact Kony and the LRA are what Human Rights Watch’s Kenneth Roth describes as a group of “roving mass murderers” that “descends on a remote village, slaughters every adult in sight, and then kidnaps the children, some shockingly young—the boys to become soldiers slinging AK-47s, the girls to serve as “bush wives.”

Limbaugh then deduced from Obama’s decision to send troops to help fight the LRA that the massacres of Coptic Christians in Cairo carried out by the Egyptian military were done with Obama’s tacit support as well, because Obama offered rhetorical support to the protesters who brought down former Egyptian Dictator Hosni Mubarak.

Of course, it wasn’t the Islamist fanatics of Limbaugh’s fevered imagination killing Christians, it was the military junta that remained in place even as Mubarak was ousted, but look—the details aren’t important. Limbaugh sensed an opportunity to imply the president was a Muslim and therefore delights in “sending a hundred troops to wipe out Christians,” and he couldn’t be bothered to look any closely than that.

Limbaugh later fielded a call including a hilarious exchange about how our parents didn’t fight in World War II so Obama could go around killing Christians, before finally realizing (at the end of the segment) that maybe the LRA wasn’t so awesome. “The Lord’s Resistance Army is being accused of really bad stuff? Child kidnapping, torture, murder, that kind of stuff? Well, we just found out about this today. We’re gonna do, of course, our due diligence research on it,” Limbaugh said. And by “due diligence,” he means reading to the fourth paragraph of the LRA wikipedia page. The point here is not just that Limbaugh’s anti-Muslim tribalism is disgusting, but also that he’s essentially exploiting genuine suffering of people on the other side of the globe to reinforce an epic narrative of right-wing self-pity and persecution here at home.

As for the legality of the operation, as Robert Farley points out, Congress approved U.S. military assistance for the purpose of neutralizing the LRA back in 2009 through the Lord’s Resistance Army Disarmament and Northern Uganda Recovery Act of 2009, which authorizes the US to provide political, economic, military, and intelligence support” to “apprehend or remove Joseph Kony and his top commanders from the battlefield.” It’s possible that the number of troops being sent has to do with the fact that in December 2008, the last time US troops tried to assist in his capture, Kony managed to escape.

The atrocities committed by the LRA aside, nations don’t use military force out of altruism. Uganda provides a substantial number of troops for the African Union Force in Somalia, where the al-Qaeda linked group al-Shabaab has control over a significant part of that country. I have no doubt that Barack Obama believes that the world would be better off without Kony and the LRA. But although it hasn’t been explicitly said, it’s a good bet the Obama administration feels obligated to assist Uganda because Uganda is helping the US fight a proxy war against an al-Qaeda affiliate, a mission that hasn’t been without cost for Uganda.

Will the mission against Kony and the LRA go as poorly as the Somalia mission has been going? I suspect it won’t. The LRA’s methods are so monstrous that the movement lacks any kind of popular support or legitimacy. This is not Obama sending US troops to Uganda to “kill Christians.” In fact, if you wanted to be crude and unsophisticated about it, the larger objective here is probably the exact opposite: The US is helping Uganda because Uganda is assisting in killing the Muslim extremists the US wants killed.