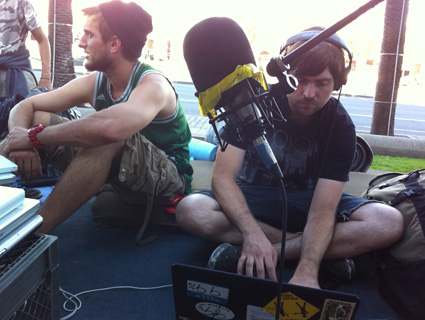 In San Francisco’s Justin Herman Plaza on Monday afternoon, a group of young, ragtag tech wizards sat among a tangle of electrical cords and surge protectors. This was the Occupy SF Media Team, which has been live-streaming video from the downtown location as much as possible in recent days. It has its own website and Kickstarter campaign to raise $5,000 in the coming week. While other protesters wandered around barefoot or strummed acoustic guitars waiting for the next general assembly meeting, the media team provides videos of the event and edited a radio story about Sunday night’s police raid for the Berkeley station KPFA.

They work with everyone at the protest, but they aren’t always in sync with other participants. At a Monday afternoon meeting of the general assembly, members of the media team were shooed away when they brought their recording equipment. “They booted me out of committee when they saw the microphone,” said Kyle Lesley, 30, an audio engineer. “They said, ‘We didn’t vote on that.'”

Some members of the media team express qualms about the amorphous nature of the protest. “Roles are necessary because they create the movement, they are the movement,” said Kames Geraghty, 20, a web developer. “Active participation is important. Talking [alone] is not participation.” Beside him, a white Apple laptop boasted a message in black permanent marker, à la Woodie Guthrie: “This machine kills fascists.”

Many of the team have taken time away from their jobs and apartments to camp at Justin Herman Plaza for an indefinite period. Lesley has subletted his Mission District apartment and taken a break from his audio engineering gigs to sleep at Occupy SF. “I have a job, pay my bills, wash my clothes,” he said, wearing a Zoo York T-shirt and paint-splattered slip-ons. “I don’t normally sleep on the street, but I’ll do it now…My fingernails are dirty. My breath probably stinks a lot.” But Lesley’s motivation is great, he said, because the spread of information plays such a crucial role in the protest: “I’ve never liked a job so much.”

“Ever since Sept. 17, I’ve been watching New York’s [live stream of] Occupy Wall Street,” added Ron Font, 35. “I was hooked, first thing in the morning. I knew it was important for information, and just to stay there emotionally.”

The team’s coverage began a few weeks ago when “some fellas showed up in the middle of the night and gave us the software…like elves” said Cory Scher, 20. The distributors are traveling between Occupy movements nationwide, Scher said, and they wished to remain anonymous. The software “elves” set the team up with Wirecast software, and Lesley brought a professional microphone to the mix. But since the live stream started, it has encountered a few kinks. Often, the battery in the streaming laptop runs out—forcing a volunteer to mount a bike generator to recharge it. Reruns of the protest are then made available on the website.

Members of the media team say they plan to occupy Justin Herman Plaza as long as they can. And they’re hoping to bridge the divide between their tech-savvy group and other protestors. Despite Occupy SF’s relatively low turnout and the obvious rap it’s gotten for attracting “dirty hippies,” the media team is undeterred. “I don’t really give a shit about image,” Lesley said. “The 99 percent is prisoners, homeless people, my parents, and doctors. They look like very different people.”