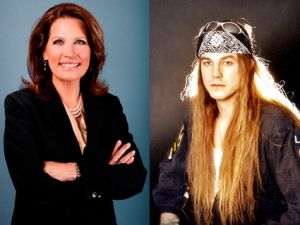 Courtesy of Congressman Michele Bachmann; <a href="http://youcanruninternational.com/">You Can Run But You Cannot Hide International

The good news for Michele Bachmann is that she’s probably not having as bad of a day as Herman Cain. But that’s about it, really. On Saturday, the Minnesota congresswoman sent out an urgent plea to supporters saying that “in order to run a winning campaign we need to raise an additional $50,000 before the end of the month.” (That’s today.) The latest polls show her at 8 percent in Iowa, a state she needs to win, and just one week earlier, her entire New Hampshire campaign staff quit en masse. Even tea party activists are calling on her to drop out of the race.

And now she has lost the support of one of her longtime allies in her Minnesota district—Bradlee Dean, an anti-gay hair-metal evangelist who Bachmann has raised money for and publicly prayed for. The folks at Dump Bachmann listened to Dean’s radio show last week and flagged this nugget, in which Dean rips into Bachmann as just another spineless politician:

It’s like the guy that walks around with an open container of cheese, you know those little string-cheese deals, in his pocket. Everyone’s walking around trying to figure out, ‘Where’s that smell coming from? You stink you stink.’ And everyone knows who stinks, they’re just trying to figure out why that individual stinks. Well, go look. But that individual’s walking around with their nose in their air like they’re all that and a bag chips. And she doesn’t realize everybody’s lookin’ at her, like, ‘Lady, you stink.'”

Burn. Dean is currently suing Rachel Maddow, MSNBC, and the American Independent News Network for $50 million for reporting on comments he made on his radio show about the morality of executing gay people, and for making fun of the fact that he spells his name “Bradlee” (really).

The second item on the Bachmann Campaign Death Watch this week is a bit more inside baseball. Last week, Minnesota House GOP leader Matt Dean (no relation) publicly endorsed Bachmann. Good news for Bachmann! But there’s some subtext: Dean is a resident of the Sixth congressional district, which Bachmann represents, and he has been rumored to have his eye on her seat. Which is to say, he may be endorsing Bachmann at this remarkably counter-cyclical moment because he would like Bachmann to stay in the race as long as possible—if not until the June deadline to file for re-election, then at least long enough to rack up some debt and alienate more people.

That’s just the way things are going for Bachmann right now. Even the good news is kind of bad news.