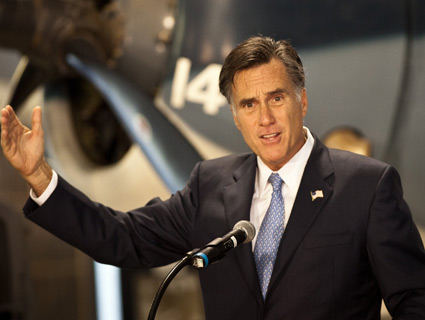 It’s no secret that Mitt Romney has an albatross around his neck: Romneycare, the Massachusetts health care overhaul he enacted while governor of the Bay State. The plan, which included a mandate compelling state residents to obtain health insurance, was a model in part for President Barack Obama’s health care reform, which is much-despised by conservatives and Republican voters.

So far, Romney has deftly navigated this potential land mine of a campaign issue. Defending his health care program, he has argued that it was significantly different from Obama’s measure—while calling for repeal of the Obama initiative. His foes in the GOP presidential primary have jabbed Romney for imposing a mandate on Massachusetts residents. But none of these blows have floored the candidate. That’s partly due to his opponents’ ineptitude.

At a September 12 debate, Texas Gov. Rick Perry did exclaim that Romneycare is “the model for Obamacare.” Yet Romney slyly replied, “I’d be careful about trusting what President Obama says as to what the source was to his plan.” Perry’s assault fizzled. But according to a story broken on Tuesday by NBC News’ Michael Isikoff, White House visitors logs reveal that Romney’s health care advisers and experts repeatedly met with senior Obama administration officials in 2009, while Obama’s health care plan was being drafted.

Thus, Romney’s opponents were handed new ammunition. But, no doubt, there’s much more material to mine for the anti-Romney opposition researchers. For instance, the below video.

This Ted Kennedy lovefest footage from the 2006 bill-signing ceremony for the health care law is probably not what Romney wants GOP primary voters to have in mind when they enter a polling place or caucus meeting. When he has discussed his health care law on the presidential campaign trail—in 2007 and this past year—Romney has occasionally noted that it demonstrated his ability to work with the opposition, including the late Sen. Kennedy. But in these settings he doesn’t describe Kennedy as his “collaborator” whose work “behind the scenes” was “absolutely essential” for passage of the health care plan. Nor does he call Kennedy, whom Romney praised for winning crucial federal support for the Massachusetts bill, a “parent” of Romneycare.

Yet on the day his health care plan became state law, an excited Romney joyously shared credit with the liberal lion of the US Senate.

As of Tuesday, only 2,016 people have viewed this video, which was posted during Romney’s 2007 presidential campaign. It would not be surprising if Romney’s opponents in the current campaign find a way to direct a bit more traffic in its direction.