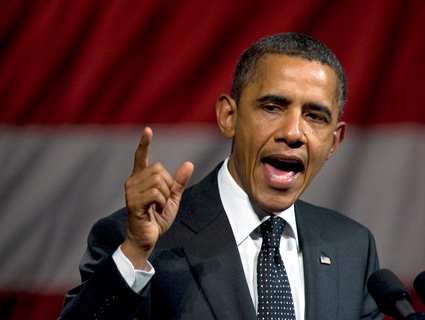 No more Mr. Nice Guy. That was President Barack Obama’s declaration at a morning press conference on Thursday. Though he didn’t put it in quite such a dramatic fashion.

The White House scheduled this presser so the president could once again call on Congress to pass the jobs bill he proposed last month. A Senate vote is due next week on the legislation (though one version of the bill could face a Senate vote as early as this afternoon), and Obama posed “a simple choice”: The US could either keep taxes for millionaires and billionaires at their current levels, or it could increase these taxes moderately to underwrite initiatives that will lead to jobs for teachers, construction workers, and others. This is not “class warfare,” he insisted. It’s a decision for the public to render.

This is largely what he’s been saying during a series of rallies he has held across the country—including in the congressional districts of the two top House Republicans, Speaker John Boehner (R-Ohio) and Majority Leader Eric Cantor (R-Va.). At the press conference, he was continuing the sales pitch.

Yet an interesting moment occurred toward the start, when Associated Press reporter Ben Feller asked whether it would be more “productive” for Obama to negotiate with the congressional Republicans than to mount a public campaign demanding passage of his American Jobs Act.

Obama, keeping his anger and frustration in check, replied that he has “gone out of my way”—often at his own political peril—to work with Republicans. He cited the most recent debt ceiling dance. The GOP, though, has responded with “games-playing” and has “preferred to score political points as opposed to getting something done.”

For much of the past year, Obama, while negotiating with the Republicans over first a budget agreement and then the debt ceiling, has generally refrained from slamming the GOP as an unreliable negotiating partner. That’s because Obama was mindful of the talks under way. It’s hard to forge a 12-year grand bargain over spending and taxes with the other side if you’re blasting away at your negotiating partners. At times, Obama poked at Republican recalcitrance. Yet it has not been a steady theme presented by the White House.

Now the president seems to be liberated to point out that the Republicans have been a tad tough to deal with these past few months. It’s hardly a full-throated denouncement of the hostage-takers. But he did observe that Senate Minority Leader Mitch McConnell has publicly defined his top task as defeating Obama in 2012, not boosting the US economy.

Still, reporters will keep on questioning Obama’s pivot toward politicking. CBS News’ Bill Plante asked the president if he was now merely campaigning—that is, following the example of President Harry Truman, who ran against a do-nothing Congress. Or, he added, “Are you negotiating?” (Perhaps a better way to have put this would have been, “Mr. President, why aren’t you bending over backward to negotiate with a political opposition that threatened economic default in order to get its way?”) In serious Washington, negotiating legislation trumps debating values.

Obama tried explaining again. He noted that he remains quite willing to listen to Republicans who have ideas about getting construction workers or teachers back to work. But, he said, the Republicans are only backing modest measures, such as trade deals and patent reform legislation. This is not enough, he asserted, “to meet the challenge of 9 percent unemployment.” He added, “If Congress does something, I can’t run against a do-nothing Congress.” (No doubt comments like that make Democratic senators cringe.)

Toward the end of the Q&A, Obama, who gave long answers to questions about Chinese currency manipulation, Solyndra, and the Fast and Furious gun trafficking investigation scandal, vowed to stick with the campaign for his jobs bill: “We’re going to keep on going at it.” Clearly, he views negotiations with the Republicans as a dead end. He was forced to conduct talks with them on the budget deal and the debt ceiling—in order to prevent negative outcomes (a government shutdown and a default crisis) that could threaten the economy. But it’s unlikely that talks about jobs legislation could yield much at this time. The dynamics that led to the craftily negotiated tax cut deal of last December, which essentially resulted in a second stimulus for Obama, are long gone, and Obama seems to have reconciled himself to the fact that the coming year will largely be consumed by a message war between him and the Republicans.

He doesn’t seem happy about that. In this press conference, he was hardly as pumped up as he has been while on the road these past few weeks. The real question is, can he sustain such a fight—the equivalent of a political ground war—for the next 13 months? It may be his only play, but it certainly will be hard for him to keep it fresh.