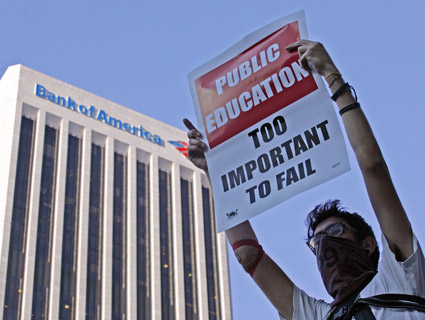 A protester at an Occupy Los Angeles demonstration on October 3.Ringo H.W. Chiu/ZUMA

In late September, major labor unions mostly watched from the sidelines as the Occupy Wall Street protests grew from a ragtag band of diehards camping in a park into a fledgling movement grabbing national headlines and sparking similar protests around the country. Now, Big Labor is going to work: endorsing the protests, offering manpower and resources, and helping stage a major march in New York City’s financial district on Wednesday. They are adding organizing muscle, fresh energy, and greater numbers to the boisterous demonstrations that began in downtown Manhattan more than two weeks ago.

Among those now jumping in is the New York State United Teachers, the Empire State’s largest union, representing 600,000 educators. In an interview Tuesday, spokesman Carl Korn for the first time publicly offered NYSUT’s support for Occupy Wall Street and its message about shrinking income inequality, investing in public education, and making the rich pay their fair share in taxes. “Teachers and public employees represent the other 99 percent; they are not in the 1 percent,” Korn said, echoing the theme of an Occupy Wall Street Tumblr gone viral. “We’re supportive of that overarching message.”

The New York educators join labor unions representing more than 2 million additional workers that have recently broadcast their support: the American Federation for State, County, and Municipal Workers (1.6 million members); Service Employees International Union’s 1199 chapter (300,000 members); Transport Workers Union Local 100 (64,000 members); and more. AFL-CIO president Richard Trumka, who personally endorsed the protests, told In These Times that he’s meeting with his union’s executive board on Wednesday to discuss a union-wide endorsement. The executive board for the Communications Workers of America (700,000 members) declared in its own statement that Occupy Wall Street “is an appropriate expression of anger for all Americans, but especially for those who have been left behind by Wall Street.”

It’s not only Occupy Wall Street winning union support. On Tuesday evening, the Greater Boston Labor Council, which speaks for 154 unions representing 90,000 workers, publicly praised Occupy Boston for shining “a spotlight on the imbalance of power in our nation and the role that Wall Street has played in devastating our economy.”

“My sense is that the outrage they’re speaking of is the same outrage we’re feeling.”

It has gone beyond just rhetoric. The unions are sending food, busing members down to the protests, and even educating and strategizing with various participants of Occupy Wall Street. This afternoon, big labor will make its biggest public display of support yet with a march from New York City Hall to Zuccotti Park.

Unlike this winter’s protests in Wisconsin, where unions played a central organizational role, union officials say they’re not trying to co-opt Occupy Wall Street. They say that they want to help without getting in the way. “My sense is that the outrage they’re speaking of is the same outrage we’re feeling here in the union,” says Larry Hanley, president of the Amalgamated Transit Union International. “We’re going to do anything we can to promote and publicize the actions.”

On Monday, a small group representing 15 different labor unions including TWU’s Holland met in Zuccotti Park to plot big labor’s strategy regarding Occupy Wall Street and hash out the details of the upcoming marches. Holland says participants used the meeting to urge other unions to publicly endorse the protests and drum up support for the upcoming marches. Holland estimated between 3,000 and 5,000 people would turn out for today’s march, but suggested that as many as 10,000 could show up if the event goes viral.

Union organizing in connection with Occupy Wall Street will continue past today. Cara Noel, a spokeswoman for United New York, a coalition of unions and community groups helping plan the march, says her organization is planning a week’s worth of events to follow. Noel says UNY decided it was the time to get involved when it heard the concerns and demands of Occupy Wall Street protesters. “Some of the things they’re asking for are similar to what we’re asking for,” she says, citing “the fight for better jobs and good wages” and making corporations “pay their fair share in taxes.”

But what impact will all the fanfare make? Unlike other union leaders, SEIU president Mary Kay Henry says splashy public statements and endorsements aren’t necessarily the best use of labor’s muscle. Instead, she explained, SEIU’s top brass is talking with its local branches on how best to support the spreading Occupy protests. “We would be happy to [issue a statement] if it helped,” she says. “Mostly what we think is necessary is logistical support—sometimes technology, sometimes money, sometimes people.”

In fact, big labor has already been supporting Occupy Wall Street behind the scenes. SEIU 1199, in New York, recently delivered water and clothes to Occupy Wall Street protesters, as well as enough pizza to feed 200 people, spokeswoman Leah Gonzalez wrote in an email. The Amalgamated Transit Union is putting together a group of lawyers to offer legal help to Occupy Wall Street protesters if they need it, according to ATU president Larry Hanley. And ATU members are also joining the small but growing Occupy DC protests demanding an end to the flow of corporate cash in American politics.

The DNA of labor unions and of the loose-knit protest movement couldn’t be more different.

Joining forces with an amorphous, leaderless group like Occupy Wall Street isn’t easy, Hanley says. When officials with his union recently paid a visit to the protesters in Zuccotti Park to ask how to help, their biggest struggle was finding someone to speak with. But Hanley also sees the fluid nature of the protests as an asset, even if it makes collaboration challenging. “I think what that says is that there are very deep beliefs that are the underpinning this effort,” Hanley says. “It’s a bunch of people following not an individual but a set of beliefs.”

No one really knows how helpful big labor’s growing involvement will be. Micah Sifry, cofounder and editor of Personal Democracy Forum, says it’s too early to tell how any collaboration might play out. “A one-day solidarity march isn’t anything like deciding to stay and hold a public space for an open-ended period,” he wrote in an email. “To me, the march in NYC is kind of like a date, not a wedding. If anything, it should help OWS reach more people and convert some to working by its methods.”

The DNA of labor unions and of the loose-knit protest movement that came to life on September 17 couldn’t be more different. Unions are by definition tightly organized, hierarchical, and run by officers and boards with a clear chain of command. Occupy Wall Street is the opposite. The Nation‘s Nathan Schneider described the movement’s General Assembly as “a horizontal, autonomous, leaderless, modified-consensus-based system with roots in anarchist thought.” It’s possible the merger of the two could splinter and derail the protests rather than sustain them.

On the other hand, big labor and the Occupy protesters, joined together, could work to create a progressive movement that effectively taps into the rising feeling among many Americans that economic opportunity has been squashed by corporate greed and the influence of the very rich in politics. Part of that trend has been the weakening of unions—and they can’t carry such a movement on their own. Perhaps in Occupy Wall Street they’ve found unlikely partners with whom to take up the cause.

Between visiting the protests and witnessing plenty of enthusiasm among union members, TWU’s Marvin Holland is optimistic about the future of Occupy Wall Street, for now. “There is definitely something building with so many different groups,” he says. “Whatever it is, I know that it’s just the beginning.”