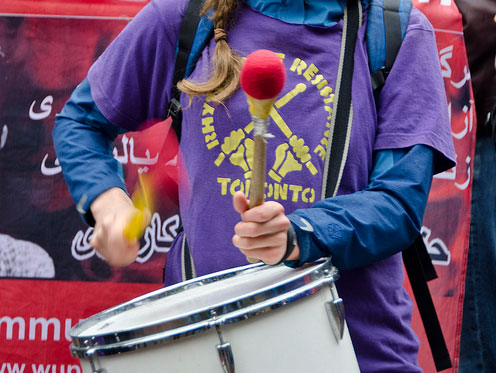 “I was 100 feet from where 4,000 people were killed. Okay? That’s what’s missing here. You are a half a block from Ground Zero. You are not occupying Wall Street—you are occupying Zuccotti Park in my backyard. And you are drumming at all kinds of crazy hours. When is it going to end?”

So said an emotional neighbor of Occupy Wall Street at a contentious, two-hour meeting last night of the Quality of Life Committee of the Manhattan Community Board 1, the city body that deals with neighborhood issues near Wall Street. Manhattan Borough President Scott Stringer had kicked things off with the admission that “tensions have been growing between protesters and residents.” And as the meeting dragged on, that seemed like an understatement.

“I am an occupier, I am a drummer, and, despite what they say, I am also a human being,” said Ashley Love, a young member of the OWS People of Color Working Group, who’d tried to organize a protest march against the meeting. “It’s primarily a commercial area; not too many people live there,” she went on, to an uproar of boos and hollers. “The majority of the drummers are people of color with low-income or no-income backgrounds, and Wall Street was built by slaves when they brought the Africans over here. The council people back then prohibited drumming because it was a way of protesting. It was a way of communication. And I just think you guys are scapegoating us.”

“They were here for ideas. And ideas are beautiful. That is why I love this country,” an immigrant janitor named Dean told me afterward.

The meeting ended with the board passing a resolution calling for #OWS to “limit the use of drums, trumpets, tambourines, bugles, and air horns to two hours per day, in midday.” Most of the occupiers support that goal, though a minority of the drummers remains stubbornly opposed. As a band containing a djembe drum, two banjos, a guitar, an acordion, a clarinet, and a fiddle marched around Zuccotti Park later that night in celebration of a Jewish holiday, oblivious to the neighbors’ concerns, Love shouted: “We love drums!” Then she added, to someone sitting next to her, “I want to join them.”

The bursts of acrimony on display last night left occupiers and residents alike worried for the future of the movement. I was so frazzled after the Community Board meeting that I left an expensive wireless internet card there and only realized it well after 10 p.m. I returned to the board’s high-security office building in what I figured was a futile attempt to retrieve it. But to my surprise, a man in a loose tie named Dean came downstairs and let me in. I expected him to be cross, but he was beaming.

The head of the building’s cleaning crew, Dean told me he’d once been put in a concentration camp by a predecessor of Slobodan Milosevic. When he saw the Statue of Liberty on his way through Ellis Island, he wept. The community meeting that night had gotten him thinking. “They are good people,” he told me as we waited for the elevator. “They were here for ideas. And ideas are beautiful. That is why I love this country.”

Dean unlocked the door to the dark meeting room, and I found my wireless card sitting on a table. He swept an arm across the room and said in awe: “They did not leave a single piece of trash.” We went back downstairs and talked for a while longer about dictators, police, and democracy in America. Then I thanked him. “No problem,” he said, fumbling for his key card. “This is your home as much as mine.”