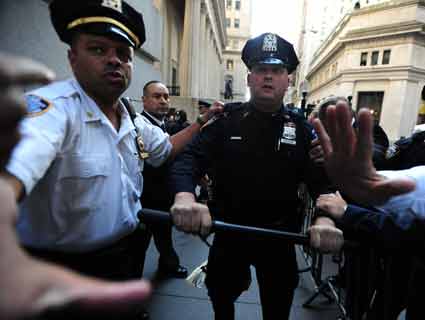 Another day at #OccupyWallStreet, another round of violence committed by the NYPD.

On Wednesday afternoon, tens of thousands supporting the nationwide Occupy Wall Street movement participated in a march from Liberty Plaza, the permanent site of the New York City demonstration, to City Hall, and then back to the plaza. Attendance figures were bolstered by a strong showing from organized labor—many members of the AFL-CIO, AFSCME, SEIU 1199, Transportation Workers Union Local 100, and other unions were on hand. (Big Labor has played a significant role as the protests have grown.) Throughout the day, protesters danced to the music of roving marching bands, debated one another, and reveled in the sight of ordinary citizens taking over the entirety of Foley Square, deep in the heart of Lower Manhattan. The daytime events went forward without known incident, but a few hours later, things turned ugly.

Explore MoJo‘s updated map of protest hot spots nationwide, see how big labor has jumped in, learn how the protests are like the Wisconsin demonstrations earlier this year, and be sure not to miss the best of #OccupySesameStreet.

At around 7:10 p.m., a cavalcade of police vans and trucks blazed south on Broadway toward Liberty Plaza. Some protesters had decided to march in the direction of Wall Street itself, which is just a few blocks away from the plaza. Police confronted the protesters before they could reach their destination, and video recorded at the scene shows several incidents of apparent police violence. In one clip, a senior officer later identified as Lieutenant Brian Connolly can be seen beating protesters with a baton. Another officer then doused the crowd with pepper spray. Connolly, who was awarded the Medal for Valor in 2007, struck local Fox television journalist Dick Brennan with his baton. A Fox photographer, Roy Isen, was sprayed in the eyes with mace. Another journalist, Luke Rudkowski of WeAreChange.org, posted videos of himself being similarly pummeled. Dozens of arrests were recorded Wednesday. (The NYPD did not respond to a request for comment.)

When I got word of the arrests, I ran back towards Liberty Plaza and down to Wall Street, where a squadron of officers on horseback had assembled. There, I witnessed several more violent arrests. A group of protesters began to march east on Beaver Street, and officers riding motorcycles zoomed up from behind.

After a confrontation, at least one motorcycle-mounted officer appeared to purposefully drive into a protester; his motorcycle ended up on the ground. Two other motorcycles were eventually knocked over after officers initiated a scuffle. Police on foot quickly swarmed Beaver Street shortly thereafter, near the intersection with New Street; officers herded demonstrators and photographers onto the sidewalk, roughly shoving some. A young woman was apprehended, thrown into the grill of a car, and arrested. Approximately six officers piled on top of another man, putting him in custody. 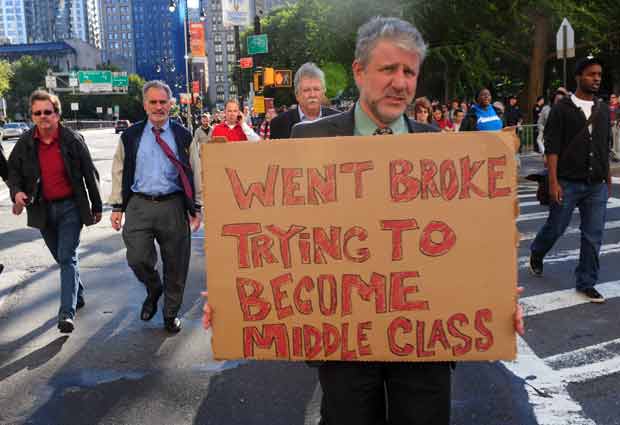 A row of officers blocked protesters and journalists from proceeding east on Beaver Street; scattered officers partially blocked off the other end, toward Broadway. Eventually, however, the bulk of protesters were able to escape by moving west.

While people were still penned on Beaver Street after the arrests, Hero Vincent—a prominent voice at Liberty Plaza—attempted to disperse the crowd by shouting instructions. Suddenly, a counterterrorism officer approached Vincent and accused him of “inciting a riot.” When I asked the officer for his name, he replied, “Get lost.”

As Occupy Wall Street moves through its third week, there is no evidence that protesters have been anything other than nonviolent, while the police have beaten, pepper-sprayed, and mocked protesters, in addition to carrying out one of the largest mass arrests in American history* last weekend, when 700 were apprehended on the Brooklyn Bridge after officers led protesters to believe that they were permitted to march across.

When interacting with demonstrators and journalists, many officers have behaved aggressively and with contempt for protesters. One cop bragged that he hoped his “little nightstick” would get a “workout” later that night. When I asked one white-shirted (i.e., not rank-and-file) officer, Lieutenant Konstantinidis, if police planned to continue abusing protesters, he replied, “maybe.”

It’s worth noting that some mass arrests at protests during the Vietnam War were considerably larger in scale; the 1971 May Day demonstrations, for instance, resulted in around 12,000 arrests.