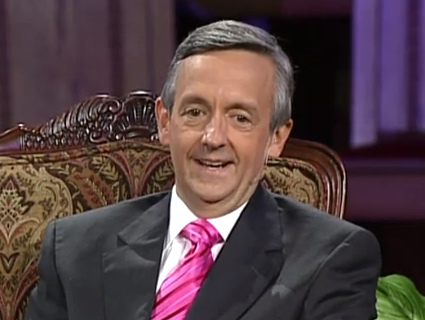 On Friday, Dallas pastor Robert Jeffress got the Rick Perry presidential campaign in a bit of trouble when he told reporters at the Values Voters Summit in DC that the governor’s top rival, Mitt Romney, belongs to a “cult,” and that his membership in an LDS church was a disqualifier as a Republican presidential candidate. Jeffress’ appearance on stage to introduce and endorse Perry* was approved by the campaign, and Perry himself praised Jeffress from the lectern.

If the Republican primary turns into a debate about Mitt Romney’s Mormonism, that’s probably bad news for everyone involved. But the former Massachusetts Governor is in good company when it comes to being slammed by Jeffress. In 2010, the mega-church pastor convened a weekly lectured series called “Politically Incorrect,” in which he tackled the kinds of issues that, in his view, society didn’t have the courage to confront. “Oprah Winfrey also claims to be a Christian,” Jeffress said in one such discussion, “but her teachings are anything but Christian.”

But Islam receives by far the harshest criticism from Jeffress. The world’s second-largest religion, he explained in a 2010 video (starting at about the 3:40 mark below), is “evil.” Here’s how he framed his opposition to the proposed Islamic community center in lower Manhattan:

The only argument that makes sense against building that mosque is to tell the truth about Islam. And that is that Islam an oppressive religion. If you don’t believe that, just look at the way it treats women around the world…it is an oppressive treater of women. It is a religion—and here’s the deep, dark, secret of Islam: It is a religion that promotes pedophilia, sex with children. This so-called prophet Mohammed raped a nine-year-old girl, had sex with her.

Jeffress continued, explaining that Islam causes grown men to want to have sex with four-year-old girls, “because they believe the Prophet Mohammed did it.” And he was sick and tired of doing nothing about it. “For Christians, the worst thing about Islam is that is a false religion leads people away from God and to spend an eternity in hell,” Jeffress said. “And I believe as Christians and conservatives it’s time to take off the gloves and to tell people the truth about this evil, evil, religion.”

Still, what Jeffress said is really not all that much different from what a lot of conservative Christians have to say about Islam. Herman Cain, the presidential candidate who rocked the house on Friday evening, has argued that Islam is not a religion and therefore not protected by the First Amendment. Rep. Michele Bachmann and former Sen. Rick Santorum have both pledged to fight the (very) slow creep of Islamic Sharia law into American courts, and Mitt Romney says Al Qaeda is plotting to create a global caliphate. Ironically, Perry’s the candidate whose name comes up most often when I ask GOP voters which contender has the worst record on fighting Shariah.

*The wording hear has been clarified.