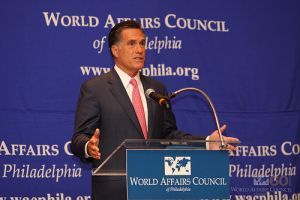 If nothing else, Mitt Romney came prepared to Tuesday’s GOP presidential debate. While his top rival Rick Perry seemed only semi-alert (perhaps he needs more sleep?), Romney was more than up to the task of responding to a steady stream of jabs from the field’s also-rans. He told Herman Cain that sometimes short and simple plans are “inadequate” when the Georgia businessman asked Romney to recite his economic plan from memory.* And when former Utah Gov. Jon Huntsman challenged Romney on his record at the private equity firm Bain Capital, stating (accurately) that Romney was not a job creator, he fought back. Hard.

Here’s what Huntsman asked: “Some might see you because of your past employment with Bain Capital as more of a financial engineer, somebody who breaks down businesses, destroys jobs, as opposed to creating jobs and opportunity, leveraging up, spinning off, enriching shareholders. Since you were number 47 as governor of the state of Massachusetts—where we were number one for example—and the whole discussion around this campaign is going to be job creation, how can you win that debate given your background?” Romney had been asked a variation of the question at previous debates, but this time he came prepared with specifics:

Well, my background is quite different than you describe, Jon.  (Chuckles.)  So the way I’ll win it is by telling people an accurate rendition of what I’ve done in my life. And fortunately, people in New Hampshire, living next door, have a pretty good sense of that.  They understand that in the business I was in, we didn’t take things apart and cut them off and sell them off. We—we instead helped start businesses. And they know some of the names. We started Staples, we started the Sports Authority, we started Bright Horizons children centers. Heck, we even started a steel mill in a farm field in Indiana.  And that steel mill operates today and employs a lot of people. So we began businesses.

None of this really changes the bottom line, which is that when Romney ran Bain he was responsible for a lot of people losing their jobs. But at least from a political standpoint, Romney was able to diffuse the line of attack. And that wasn’t the only sign that Romney was playing at a higher level than the rest of the field: Given the chance to ask a question of his own to any other candidate at the table, he wisely chose to lob a softball at Michele Bachmann, who poses virtually no threat to his own candidacy but could help derail Perry in Iowa.