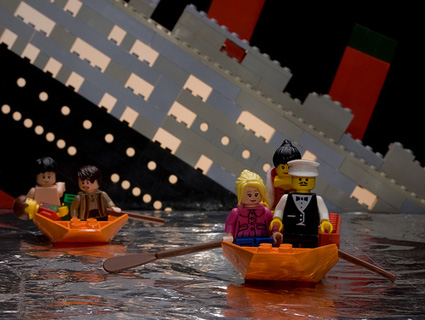 Corporate chieftains often claim that fixing the US economy requires signing new free trade deals, lowering government debt, and attracting lots of foreign investment. But a major new study has found that those things matter less than an economic driver that CEOs hate talking about: equality.

“Countries where income was more equally distributed tended to have longer growth spells,” says economist Andrew Berg, whose study appears in the current issue of Finance & Development, the quarterly magazine of the International Monetary Fund. Comparing six major economic variables across the world’s economies, Berg found that equality of incomes was the most important factor in preventing a major downturn. (See top chart.) 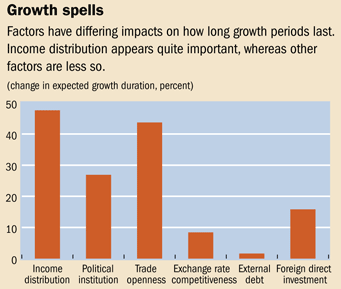 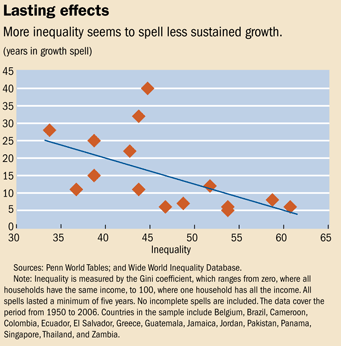 In their study, Berg and coauthor Jonathan Ostry were less interested in looking at how to spark economic growth than how to sustain it. “Getting growth going is not that difficult; it’s keeping it going that is hard,” Berg explains. For example, the bailouts and stimulus pulled the US economy out of recession but haven’t been enough to fuel a steady recovery. Berg’s research suggests that sky-high income inequality in the United States could be partly to blame.

So how important is equality? According to the study, making an economy’s income distribution 10 percent more equitable prolongs its typical growth spell by 50 percent. In one case study, Berg looked at Latin America, which is historically much more economically stratified than emerging Asia and also has shorter periods of growth. He found that closing half of the inequality gap between Latin America and Asia would more than double the expected length of Latin America’s growth spells. Increasing income inequality has the opposite effect: “We find that more inequality lowers growth,” Berg says. (See bottom chart.)

Berg and Ostry aren’t the first economists to suggest that income inequality can torpedo the economy. Marriner Eccles, the Depression-era chairman of the Federal Reserve (and an architect of the New Deal), blamed the Great Crash on the nation’s wealth gap. “A giant suction pump had by 1929-1930 drawn into a few hands an increasing portion of currently produced wealth,” Eccles recalled in his memoirs. “In consequence, as in a poker game where the chips were concentrated in fewer and fewer hands, the other fellows could stay in the game only by borrowing. When the credit ran out, the game stopped.”

Many economists believe a similar process has unfolded over the past decade. Median wages grew too little over the past 30 years to drive the kind of spending necessary to sustain the consumer economy. Instead, increasingly exotic forms of credit filled the gap, as the wealthy offered the middle class alluring credit card deals and variable-interest subprime loans. This allowed rich investors to keep making money and everyone else to feel like they were keeping up—until the whole system imploded.

Income inequality has other economic downsides. Research suggests that unequal societies have a harder time getting their citizens to support government spending because they believe that it will only benefit elites. A population where many lack access to health care, education, and bank loans can’t contribute as much to the economy. And, of course, income inequality goes hand-in-hand with crippling political instability, as we’ve seen during the Arab Spring in Tunisia, Egypt, and Libya.

History shows that “sustainable reforms are only possible when the benefits are widely shared,” Berg says. “We hope that we don’t have to relearn that the hard way.”

Don’t miss our blockbuster collection of infographics: “It’s the Inequality, Stupid,” and our new, interactive explainer map of the Occupy Wall Street protests.