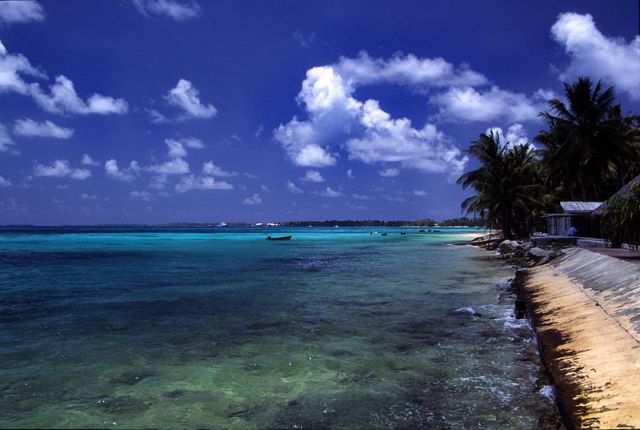 The Telegraph reports that Tuvalu’s state of emergency was declared after existing desalination plants broke, exacerbating an already dire drought:

The Tuvalu Red Cross said it had not rained properly in the country for more than six months. Meteorologists have forecast a lack of run until December. Typically it gets between 200mm to 400mm [~8 to 16 inches] of rainfall per month… [New Zealand] was working with the Red Cross to deliver aid workers and supplies as quickly as possible. 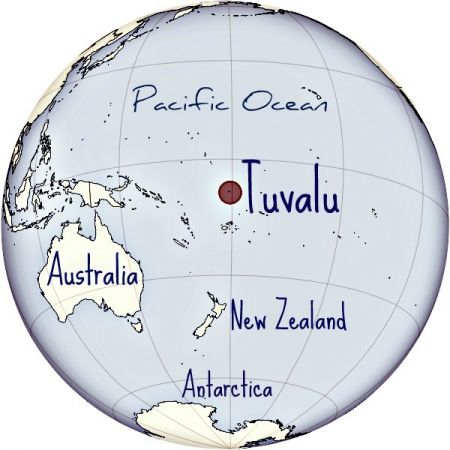 Location of the Pacific island nation of Tuvalu.: Credit: TUBS via Wikimedia Commons, modified by Julia Whitty.I wrote about the troubles facing Tuvalu’s nine tiny islands in my 2003 Mother Jones article All the Disappearing Islands. At that time Tuvalu was threatening to sue Earth’s gassiest nations for emitting enough CO2 to sink Tuvalu for good:

Tuvalu is among the smallest and most remote countries on Earth, with a total land mass comprising only 10 square miles/26 square kilometers, less than half the size of Manhattan and scattered over 347,400 square miles/899,000 sq km of ocean—an area larger than California, Oregon, and Washington combined… At no point is the sandy island of Funafuti higher than 13 feet above sea level, as is the case throughout the nine coral atolls of this South Pacific nation of Tuvalu. Surrounded by the sea, the people here have been shaped by it as few others on earth. Every afternoon, rain or shine, Tuvaluan children romp in its unsupervised playground… Inescapably, this is a nation of waterfront property; even the plywood and corrugated-tin houses standing ‘inland’ a block or two enjoy the ambiance of the ocean. No one here has ever lived a moment without hearing the thunder of surf. 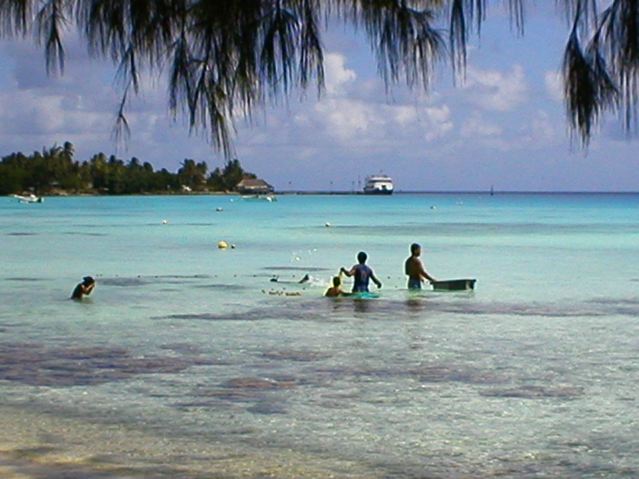 Secretary General Tataua Pefe advised people against drinking water from wells. “It’s not safe for consumption,” he told Radio Australia. “Some animals have died recently and we think it’s because of subterranean water.”

In The Fragile Edge I wrote how Tuvalu’s problem with freshwater contamination could render its islands uninhabitable long before rising sea levels irrevocably sinks them:

Floods and rogue waves raise the saltwater table underlying the atolls, poisoning the Tuvaluans’ staple crops. Already some farmers have been forced to grow their [crops] in tin containers, and already some of the smaller motus [islands] have lost their coconut palms to saltwater intrusion. Nor are storms a prerequisite for disaster. “Last August,” Prime Minister Saufatu Sopoanga tells me, “on a clear, calm day, a sudden wave surge rolled in from the sea and washed across Funafuti into the lagoon, flooding houses.” There was no apparent reason for it, and during my stay on the atoll, I find the sensation of threat to be ever present—the sea on both sides, the constant drumroll of surf, a thin strip of land between—like living on a liquid fault line.

Meanwhile 3 News New Zealand reports the drought is affecting other Pacific islands too, notably Tokelau—a New Zealand territory of fewer than 1,500 people living on three coral atolls in the central Pacific—which has also declared a state of emergency.

At the same time The Taiwan News reports a possible cholera outbreak in Tuvalu. 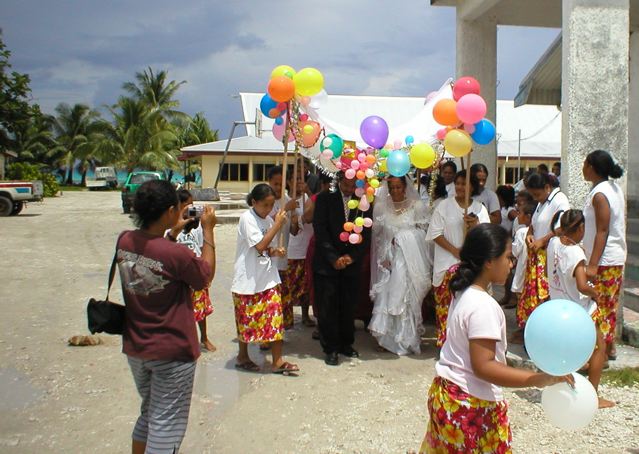 Wedding on Funafuti atoll, Tuvalu. Credit: © Julia Whitty.Inundated by ills from afar, more and more Tuvaluans are leaving their home islands—and not because they want to. From All the Disappearing Islands:

Within the coming decades, the atolls of Tuvalu and elsewhere will almost certainly revert to sandbars and then nothing. Although the people themselves will not go extinct, without their home islands to anchor them, their beliefs and identity probably will, scattered person by person across the rising waters… until, like Atlantis, the name of Tuvalu fades into myth.