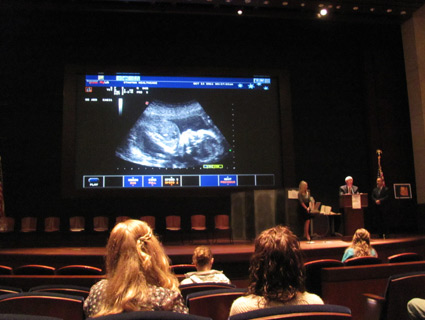 Members of Congress hear from lobbyists of all stripes on any given day in Washington. But on Thursday, anti-abortion groups decided to bring a new lobby to the Hill: the fetus. Voices from the Womb—sponsored by a trio of anti-abortion groups—was promoted as offering the first live ultrasounds in the Capitol building. Over the course of two hours, half a dozen women had public ultrasounds, an anti-abortion member of Congress cried on stage, and ministers prayed for the passage of new legislation to end abortion.

“There’s one person who has not come to DC yet to testify,” said Rev. Patrick Mahoney of the Christian Defense Coalition. “That is, until today: That’s the millions of pre-born children.”

The ultrasounds happened in the Capitol Visitors Center against the backdrop of the House considering a controversial anti-abortion bill, the Protect Life Act. The bill, sponsored by Rep. Joseph Pitts (R-Pa.), would allow federally funded hospitals to refuse to provide abortion services, even if the life of the mother is at risk. The hospitals wouldn’t even be required to transfer the woman to another hospital that would provide the abortion. It would also prevent people who receive tax credits for health care from purchasing insurance that covers abortion services. Many health care experts believe this would lead most private health insurance companies to stop covering abortion. The bill would also allow states to pass their own laws to opt out of the new federal rule requiring insurers to offer no-cost birth control. The House is slated to vote on Pitt’s bill Thursday evening. [UPDATE: The House passed the legislation on Thursday evening. It’s not expected to get any traction in the Senate, however.]

One of Pitts’ staffers, Mary O’Connor, participated in the public ultrasound on Thursday, showing her 15 1/2-week-old fetus on the screen. About three inches long at this point in gestation, Swindell likened it to a peanut as it flashed across the screen. Sen. Roger Wicker (R-Miss.), Rep. Louie Gohmert (R-Texas), and Rep. Trent Franks (R-Ariz.) all were on hand. “You can’t tell if it’s a boy or a girl,” joked Franks in his remarks. “But can you tell if it’s a Democrat or a Republican? That’s something I would hope you can find out.” Franks teared up talking about his own twins, a daughter and son. “I am convinced that that day will come when the sunlight of life will break through these crowds,” Franks continued, choking up again, “and shine on the faces of the little unborn children.”

The event kicked off with the ultrasound of a woman 19 weeks pregnant in the auditorium of the Capitol Visitor Center. “That’s pretty obvious,” proclaimed event cosponsor Brandi Swindell, the founder of Idaho crisis pregnancy center Stanton Healthcare. “That’s a baby in there.” Ultrasound technician Dana Miller played the audio of the heat beat and described what was projected on the giant movie screen—a head, back bone, eye sockets. “So he or she is looking at you,” Miller cooed. “With the arm up, right by the head.” The crowd of around 150 onlookers ate it up. “Wow!” someone said aloud.

“The detail is so absolutely incredible,” said Swindell, a pretty blonde in a black pencil skirt and taupe pumps. “It’s hard to imagine that there are people who want to deny the humanity of the preborn child.” Representatives from the Christian Defense Coalition and the National Pro-Life Center also participated in the event. The office of Rep. Paul Broun (R-Ga.) reserved the auditorium for the event, though the congressman wasn’t able to make it due to time conflicts, according to organizers.

The women who participated ranged from 7 1/2 weeks to 30 weeks pregnant. What the event’s speakers failed to mention is that half of all abortions happen within the first eight weeks after conception, and 88 percent occur in the first three months of pregnancy. It is only rare cases, usually those where the health of the mother or the fetus itself is at risk, that a woman as far along as most of those featured on Thursday would seek an abortion. But amorphous blobs aren’t quite as compelling as images of third-trimester fetuses.

Renee Doyle, a legislative assistant for Rep. Michele Bachmann, was also on hand to speak about the congresswoman’s own recently introduced bill, the Heartbeat Informed Consent Act, which would force women to view an ultrasound of a fetus and hear audio of the heartbeat before she can obtain an abortion. Bachmann’s bill is the national equivalent of laws that passed in Florida and Texas this year. The name is borrowed from legislation proposed in Ohio that would ban abortion at the point that a heartbeat is detectable in the fetus—as early as six weeks after conception.

This brand of legislation is directly aimed at reducing the number of abortions. Mahoney claimed that abortion opponents could achieve an 83 percent reduction in abortions simply by forcing women to view an ultrasound. But there’s a bigger goal—particularly with the Thursday public ultrasound session—which is building their case that a fetus merits the same protection under the law as a person. “If we can prove it’s a life, Roe v. Wade is invalid,” said Mahoney. Organizers hope that the next ultrasound event will move outside of the Capitol Visitors Center auditorium and into a hearing room. “Can you imagine, Sen. Wicker,” Mahoney said to the highest-ranking of their guests, “how exciting it would be to have this in a hearing? To have the voice of the children themselves?”

The event wrapped up with a prayer from Mahoney for the passage of the Protect Life Act in the House later that day, and that the “voices” of the ultrasounds would be heard: “How awesome is it that even though they couldn’t go on the floor, they are testifying here?”