The Grand Prismatic Spring in Yellowstone National Park, the largest hot spring in the United States and the third largest in the world, is one of our planet’s great natural wonders. Rarely has a site of such beauty been so volatile and so dangerous.

With a diameter of 300 feet, the hot spring has been feared and revered in equal measure since it was discovered and named in 1871—named for its striking coloration. But looks can be deceiving since beneath the surface lies a potentially deadly supervolcano. 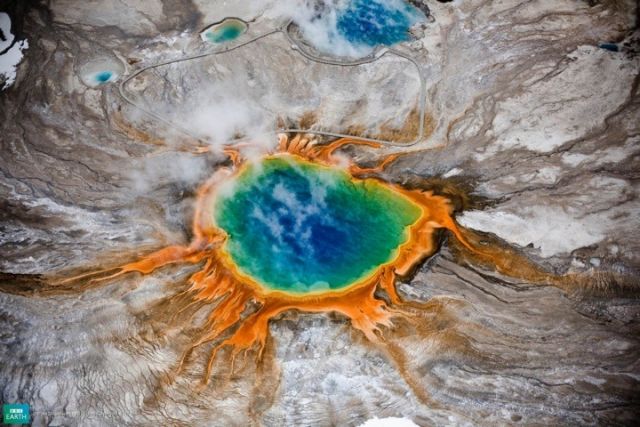 From above: the stunning scene of the Grand Prismatic Spring, Yellowstone National Park.

Supervolcanoes are unique because of their sheer size: In one eruption they can spew out more than 240 cubic miles of magma—enough to reach every person on the planet. The volcano underneath Yellowstone National Park last erupted over 640,000 years ago but unlike most super-volcanoes on the planet it is not extinct. Yellowstone sits atop a magma chamber that is 50 miles long, 25 miles wide and 5 miles deep—large enough to fit New York City inside it three times over—and it is still alive and kicking.

Supervolcanoes do not have the classic cone shape of traditional volcanoes and are hard to detect—until they erupt. After expelling vast amounts of magma the chamber on which the volcanoes sit collapses, leaving behind a crater, also known as a caldera. Some calderas are so vast that they can only be seen from space. The one in Yellowstone measures about 28 by 47 miles, and powers the park’s famous geysers, hot springs, fumaroles, and mud pots that attract more than three million visitors a year.

One marvelous feature of the Grand Prismatic Spring is its colored waters. The striation is caused by the spreading out and subsequent cooling of water. Water rises to the surface in the centre of the pool at approximately 189 degrees Fahrenheit—too hot for most organisms to live in. But as the water spreads out towards the edges of the pool it cools down, creating temperature bands that provide optimum conditions for various colored organisms to thrive in, thus giving the pool its characteristic patterns. Watch these thermophilic organisms and how they have informed our understanding of the first life forms on earth in the video below, from the BBC Earth series Yellowstone.

What are the chances of a supervolcanic awakening in the near future? Between 2004 and 2008, the caldera floor rose by around 10 cm a year, thought to be caused by a magma reservoir swelling. Recent reports have stated that the uplift has slowed significantly and that it’s difficult to read the geological signs of a super eruption because it hasn’t happened within recorded scientific memory. Because of this, it’s unlikely that we will see an explosion of this size in our lifetime. But you never know.