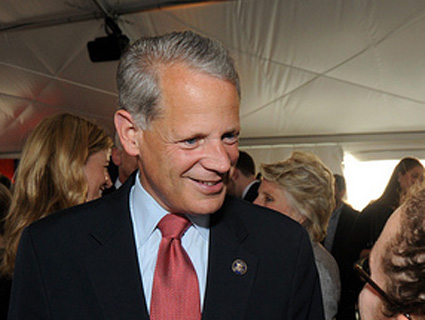 Earlier this week, Arizona Gov. Jan Brewer declared war on the state’s Independent Redistricting Commission (IRC), a non-partisan entity created in 2000 to remove state lawmakers from the redistricting process. In a special session on Tuesday, Brewer and Republicans in the state Senate forced a vote—which passed, 21-6—to remove the commission’s independent chairwoman.

The IRC’s map creates four GOP-friendly districts, two Democrat-friendly ones, and three toss-ups. At first glance, it looks like a pretty good deal for Republicans. Brewer’s beef: That the commission drew several voting districts in shapes that “are not geographically compact and contiguous…do not respect communities of interest, and…were not drawn using visible geographic features.” Brewer also charges that the IRC’s independent chairwoman, Colleen Mathis, violated existing Arizona law by privately negotiating to award a mapping contract to a firm with ties to the Democratic Party.

Those allegations could turn out to be true. But Brewer’s decision to nuke the commission before letting legal proceedings take their course suggests that she wants to dismantle it for political—rather than legal—reasons. Brewer is annoyed that the commission’s map pits incumbent Republican Congressmen Ben Quayle and David Schwiekert against each other in next year’s elections. That’s not really a fair complaint: the IRC isn’t allowed to use the addresses of incumbents when drawing its maps.

Democrats, unsurprisingly, see Mathis’ removal as a partisan power grab intended to give the GOP the power to make an already Republican-leaning congressional map even redder. On Friday, the Dems sent the strongest signal yet that they’re plotting massive retaliation. The Washington Post explains:

“I think Arizonans should consider impeaching Jan Brewer,” Israel said today, adding that he knew the situation well because he has family in the state…. “We will push every button, we will use every strategy, we will appeal to any fair court to redress this trampling of a fair and independent process,” Israel declared. “Instead of impeaching the highly regarded, truly independent leader of that body, that Republicans and Democrats agreed upon, Gov. Brewer ought to think about impeaching herself.”

Israel’s fighting words aside, it’s still unclear whether Democrats can nationalize this state-level fight. Carolyn Fiddler, a spokesperson for the Democratic Legislative Campaign Commitee, said that the Arizona situation “holds huge implications for the national level, even though only a minority of states” conduct redistricting through independent panels. “If they are successful with what they’re trying to do in Arizona, it will embolden other states that haven’t completed their own processes to be as partisan and extreme in their tactics as possible,” Fiddler says.

Earlier this week, the Post‘s Greg Sargent compared Brewer’s move against the IRC to another recent, power-abusing GOP move: Wisconsin Gov. Scott Walker’s effort to gut public unions earlier this year, a position that Jonathan Bernstein, a political scientist who writes on national politics, agrees with. “The consistent thing is to…use electoral wins to try change partisan structural stuff, as opposed to placing a priority on substantive policy changes,” Bernstein wrote in an email to Mother Jones. Bernstein also predicted that Democrats would mount a recall campaign against Brewer.

According to Arizona law, Democrats need to collect roughly 430,000 signatures—or 25 percent of the number of Arizonans that voted in statewide elections in 2010—to get a recall initiative on the ballot. There are about 975,000 registered Democrats in Arizona, meaning that the party would need nearly 45 percent of their supporters to get on board the recall train. Even if the recall were to get on the ballot, it’d be an uphill battle: Republicans enjoy a healthy 150,000 advantage among the state’s registered voters. Brewer might just get away with booting Mathis.