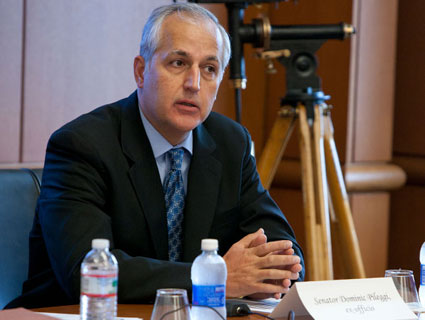 Dominic Pileggi, the Republican majority leader in Pennsylvania's state Senate, is mulling a run for US Senate. He's been a prominent supporter of the plan to change the way Pennsylvania awards its electoral votes in a way that could rig the presidential election against Barack Obama.<a href="http://www.senatorpileggi.com/photos-2011/1011/101311-lincoln-003.htm">SenatorPileggi.com</a>

Dominic Pileggi, the Pennsylvania state Senate majority leader, has attracted national media attention for his role as the author of the controversial, dark-money-funded plan to change the way the state awards electoral votes in order to rig the presidential election against Obama. Now the GOP lawmaker is considering a bid for US Senate.

Pileggi says he’s “been approached by a number of people about the possibility of running for U.S. Senate,” he said in a statement to the website PoliticsPA on Monday. Pileggi added that he’s “flattered by the question,” and has “made no decision,” but PoliticsPA cites multiple sources who claim the state Senator has already met with national Republicans about running against Democratic incumbent Bob Casey next November.

Pileggi’s electoral college plan is one of two—there’s also an effort underway in Wisconsin—that would change how electoral votes are awarded in a presidential election. A candidate needs 270 of the 538 electoral votes to win the presidency, and under the current system, the winner of the statewide popular vote receives all of the electoral votes from that state.

Because Republicans will draw the boundaries of the congressional districts in Pennsylvania, the new rules would mean that Obama could win the state but still receive fewer electoral votes than his Republican opponent. Should a Republican split the state’s electoral votes with Obama (even if Obama draws more votes), that could provide the GOPer with the margin of victory in a close race. (Under the US Constitution, it is up to the states to allot electoral votes as they see fit.)

But Pileggi’s effort has run aground in recent weeks, with GOP Gov. Tom Corbett saying last week that he still supports the plan but sees “no movement” on it and won’t push for any. Pete DeCoursey, a Harrisburg-based journalist who has been all over this story, notes that opposition from state Republican committee chairman Rob Gleason, the state GOP donor establishment, and national Republicans, including Republican National Committee chair Reince Priebus, made passage of the plan difficult, even in a state where the GOP controls both houses of the legislature and the governorship.