Enviros were, understandably, quite pleased by last week’s announcement that they Keystone XL pipeline has been indefinitely delayed. The Obama administration hasn’t outright rejected it, but it is punting the decision to at least the end of 2012, pending further assessment of its environmental impact. But many see this as a significant victory for US environmentalists.

The likely demise of the Keystone XL doesn’t necessarily mean that the oil from the tar sands stays in the ground. It probably just means it won’t come into the United States. Instead, it’s likely that more oil will be shipped to Canada’s west coast, via other proposed pipelines. Speaking at the Asian-Pacific Economic Cooperation summit in Honolulu over the weekend, Canadian Prime Minister Stephen Harper stated that the country will instead increase its focus on exports to Asia. From the Wall Street Journal:

“This does underscore the necessity of Canada making sure that we are able to access Asia markets for our energy products,” Mr. Harper told reporters in Honolulu, according to a transcript provided by his office. “And that will be an important priority of our government going forward.” Mr. Harper said he made that point in a meeting the day before with Chinese president Hu Jintao.

Probably the biggest reason TransCanada wanted to build the Keystone XL line across the United States is all the refining infrastructure we have in Texas already. There isn’t nearly as much built up on Canada’s western coast. But shipping through the West would provide handy access to the growing Asian market, and there are already companies lined up to do just that. 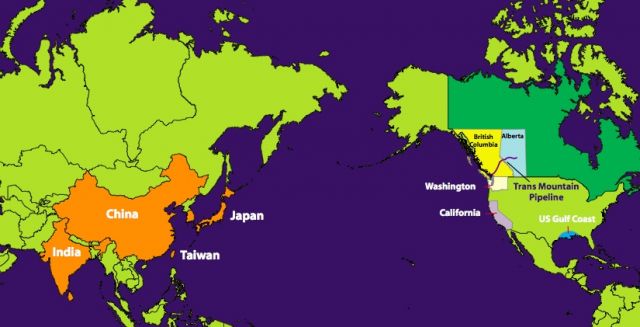 Enbridge has also proposed the Northern Gateway pipeline, which would run two pipelines between Alberta and a new terminal to be built in Kitimat, British Columbia. That project, which is currently under review, would carry 525,000 barrels of oil to the port every day. Here’s the map of that proposed project: 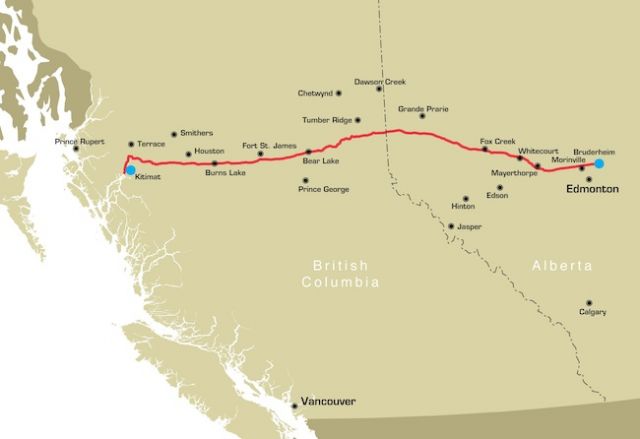 That’s not to say that one can’t see the delay on the Keystone pipeline as a victory for US climate policy. Anyone hoping the United States will step up its game on climate-changing emissions is glad that we won’t be adding a whole bunch of new, carbon-heavy tar sands oil to our repertoire. It would obviously look bad if a president who supposedly cares about ending reliance on fossil fuel approved a massive pipeline to import unconventional oil. And it’s also a clear victory for the critics who were concerned about running the pipeline through Nebraska’s sand hills and the Midwest’s massive Ogallala Aquifer, as well as for environmental-justice advocates in the refinery towns of Texas.

But the tar sands will probably still be developed, and someone, somewhere, will still burn that oil. Energy-hungry China is excited about developing the tar sands—so much so that Chinese firms have invested $15 billion in Alberta in just the last 18 months. While the United States is still the world’s top oil consumer, China’s intake has been on the rise. India, too, has been angling for tar sands oil. Canada knows that they can find other places to ship that oil, as Harper’s comment reiterates.

Even if Keystone is out of the picture for now, tar sands development will still be a problem for the people who live in the region, not to mention the climate as a whole, as that carbon-heavy fuel is used.