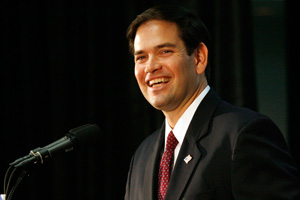 On Thursday, while the country was digesting the lowlights of the latest GOP presidential debate, some of the Republican faithful were in DC hearing from a lawmaker many Republicans would like to see on the ticket in 2012: Sen. Marco Rubio (R-Fla.).

Rubio, who’s on the short list of potential vice presidential candidates, didn’t disappoint. The man occasionally called the “Cuban Barack Obama” wowed a crowd of conservative Federalist Society lawyers with a speech on the “Constitution of Small Government.” It could have been really dry, but was, in fact, almost inspirational.

Rubio was propelled to victory last fall thanks to his wooing of Florida tea partiers with fiery speeches about fiscal responsibility and smaller government. Despite his Cuban ancestry, he campaigned as an immigration hawk. And he even showed little sympathy for extending unemployment benefits to struggling Americans unless they were paid for by budget cuts elsewhere.

On Thursday, though, he didn’t sound much like a tea partier. Nor did he echo much of the increasing anti-government rhetoric of the GOP presidential candiates. Instead, he actually acknowledged a place for government, took shots at big business, and—gasp!—argued in favor of a social safety net. He sounded like a younger, smarter George W. Bush, articulating something that sounded a lot like compassionate conservatism. It was clear why the unfunny and often dull front-runner Mitt Romney has said he’d like him as a possible running mate.

Rubio was at ease before the crowd, especially compared to some of his speeches last year, where he came off as stilted, stiff—like someone ticking off standard Club for Growth talking points. On Thursday Rubio spoke nimbly for half an hour without teleprompters and barely looking at notes. He broke the ice by comparing Congress to the World Wrestling Federation. He said that like WWF, the combatants fight for the cameras during the day, but after hours you might find them sitting at a bar having a drink together.

Rubio seemed to be calling for a third way, outside the conventional political paradigm, without calling it bipartisanship. He went on:

Of course, for a conservative, there’s not much risk in expressing support for the military. But Rubio’s defense of the public safety net certainly was an unexpected turn. Rubio said:

Those of us who believe in the free enterprise system believe in the safety net. Not as a way of life. Some people think the safety net is something you should rely on for sustenance the rest of your life. But I believe that if you’re going to have a free enterprise system where people are going to take risks, and people are going to reach for the stars, you’d better set up a net so that if they fall, they can stand up, get back up and try again. I believe we are too rich, too compassionate, too prosperous a people to say to the infirm, to say to the disabled, to say to the elderly, “go out and fend for your self in the market place.”

The Florida senator even managed to hit some populist notes by focusing on small businesses and ordinary people, who tend to get short shrift these days in political speeches. In a gentle jab at corporate America, Rubio noted that big businesses could survive messed up tax codes and burdensome regulations because they have the resources to hire lawyers and accountants and lobbyists to deal with them. But small businesses, the people who start their companies in the garage, Rubio said, don’t have that luxury, and they’re the ones who get hurt.

“We’re not anti-big business,” he said. But he explained, “Neither Washington nor Wall Street is the source of our greatness. The source of our greatness is something much more common, much more understated, and much more misunderstood, and that is the every day lives of every day people. Hardworking people every day are changing the world, one day, one block, one family, one community at a time, and you’ll never know about it.”

The conservatives in the audience gave him a hearty standing ovation when he finished. Nearby, a woman jumped from her seat and exclaimed, “He’s going to be president some day!”