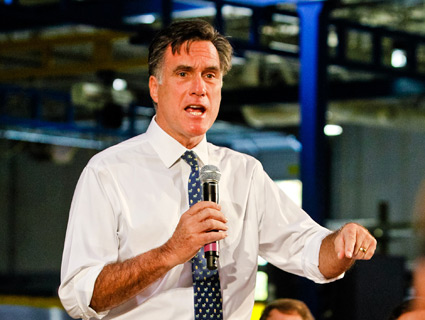 In a bizarre press release titled “WHAT THEY’RE SAYING: ROMNEY FOR PRESIDENT’S TELEVISION AD ‘BELIEVE IN AMERICA,'” Mitt Romney’s staffers pat themselves on the back for the campaign’s latest commercial, claiming the pundits and the press swooned over the clarity and cleverness of their new attack ad:

The New York Times: “Moving the campaign into a more combative phase, Mitt Romney is set to show his first television commercial of the campaign on Tuesday in New Hampshire, attacking President Obama over his economic leadership on the same day the president will visit the state to discuss his plans for turning around the economy. … By focusing his message on the president, Mr. Romney is trying to show Republicans that he can take on Mr. Obama aggressively, an attribute that conservatives are seeking in a nominee.” (The New York Times, 11/21/11) …

The Associated Press: “Former Massachusetts Gov. Mitt Romney is turning President Barack Obama’s own words against him in the Republican hopeful’s TV first ad of his 2012 White House bid. … [Romney] said the commercial would compare Obama’s message as a candidate with Romney’s credentials as a businessman. ‘The contrast between what he said and what he did is so stark, people will recognize we really do need to have someone new lead this country,’ Romney said in an interview with Fox News Channel.” (The Associated Press, 11/21/11) …

GOP Strategist Ed Rogers: “In the Romney campaign, we may be witnessing a truly well-designed and well-executed campaign. … This ad represents more of the same from the Romney campaign. … The ad opens with grainy images of Obama, and it uses Obama’s own words to highlight his administration’s economic failures. … It touches all the right buttons and has all of the right images.” (The Washington Post’s “The Insiders,” 11/22/11)

Back in the real world, the media’s actual response to Romney’s ad wasn’t characterized by praise. To the contrary: descriptions of the deceptive commercial ranged from “misleading” to “entirely a lie,” and PolitiFact gave the TV spot its not-so-coveted “Pants On Fire” grading.

Just to recap, here’s Romney’s “Believe In America” ad that attempts to trap Obama using the president’s “own words against him”:

The offending soundbite—”if we keep talking about the economy we’re going to lose”—was taken from a clip of then-Senator Barack Obama quoting a McCain campaign aide in 2008, not President Obama bemoaning the state of the economy in 2011. So, basically, what the Romney campaign did this week can be summed up accurately in the following clip…