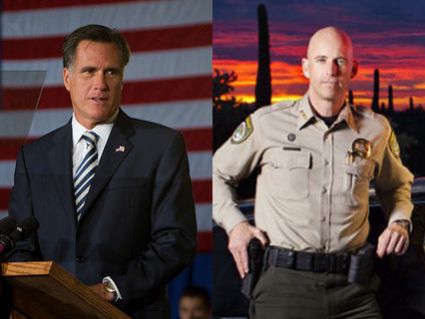 When GOP presidential candidate Mitt Romney deployed his first robo-calls in Iowa last week, he went straight for the soft underbelly of his most serious rival. “Rick Perry is opposing a border fence and granting in-state tuition benefits to illegal immigrants,” the caller said. “Rick Perry is part of the illegal immigration problem.”

The voice belonged to Paul Babeu, the sheriff of Arizona’s Pinal County and a possible Republican congressional candidate. As Romney looks to ding Perry for being insufficiently tough on undocumented immigrants, the support of such a high-profile law enforcement official could be a valuable asset—especially given the former Massachusetts governor’s own wobbly history on the topic. But Babeu comes with some serious baggage. Over the last two years, the federal government and local politicians have repeatedly chided Babeu for making sensationalist, unsubstantiated allegations about border violence. Babeu has called President Obama “the enemy” and said the president has come close to committing treason through his immigration policies. He has also come under criticism by for appearing on a white nationalist talk radio program that’s been a frequent platform for white supremacists.

Babeu is best known for his public advocacy on behalf of Arizona’s controversial 2010 immigration law, SB 1070. His tough talk on border crime has made him a high-profile figure on the right. He’s dubbed himself “Sheriff Paul”—a nod to fellow Arizonan “Sheriff Joe” Arpaio—and made frequent appearances on Fox News. In July 2010, in the midst of a media blitz to promote the bill, he appeared on a Memphis-based radio program called “The Political Cesspool.” The show’s cohost, James Edwards, has been labeled a “white nationalist” by both the Anti-Defamation League and the Southern Poverty Law Center. And although Edwards rejects the “white supremacist” label (and calls the SPLC a “hate group”), he refers to his show as “pro-white.” A quick glance at The Political Cesspool website reveals numerous posts questioning the IQ of black NBA players and one referring to predominantly black East St. Louis, Illinois, as “the heart of darkness.” The site also outlines a broad mission “to revive the White birthrate above replacement level fertility and beyond to grow the percentage of Whites in the world relative to other races.”

At the 2011 National Rifle Association convention, Babeu referred to President Obama as “the enemy.”

After Babeu’s appearance was reported by local papers, Pinal County Sheriff Department spokesman Tim Gaffney released a statement chalking the interview up to a misunderstanding. He noted that the sheriff does lots of interviews and that Edwards’ history of making controversial statements, including calling blacks “heathen savages,” had slipped through the cracks. “I immediately contacted Sheriff Babeu who was extremely disappointed that a station with those beliefs would have him on the air, knowing how vocal and strongly opposed he is to these types of people and their beliefs,” Gaffney said. “Sheriff Babeu has asked repeatedly that groups with these type of beliefs to have ‘no association with the Pinal County Sheriff’s Office [sic].'”

But that seemed to be news to Edwards, who took to his blog at the Cesspool to contradict most of what Gaffney said. “For Sheriff Babeu to change his mind and now regret coming on our show, for whatever reason, is his right,” Edwards wrote, stating that, contra Gaffney’s denial, his cohost had personally spoken with Babeu prior to the interview. “For him to act as though he had no idea of our ideology is a lie.”

[Cohost] Eddie Miller spoke with the Sheriff personally, a week in advance of the interview, during which it was made specifically clear (so there could be no “confusion”) the nature of our paleoconservative radio program (which was mentioned several times by name) and some of the attacks we’ve sustained from hate groups like the ADL and SPLC. That conversation was very positive and phone records can prove it took place. Our last conversation with the Sheriff’s office took place last night, just hours before the issuance of this press release, and it too, was positive. Never have we been told to distance ourselves from the Sheriff, quite the opposite, in fact.

Adding credence to Edwards’ claim, Miller and Babeu actually discuss their conversation from the previous week during the interview (the full audio is available here). As Media Matters reported, Babeu preceded his interview on the “Cesspool” with an interview, just a few days earlier, on the program of über-conspiracy theorist Alex Jones. Jones, a 9/11 truther who made the films Endgame: Blueprint for Global Enslavement and Police State 4: Rise of FEMA, asked Babeu if he considered Obama’s immigration policies treasonous. “It borderlines that,” Babeu said, adding that “we’re running down, sprinting down the path to socialism.” That wasn’t a one-off incident, either. At the 2011 National Rifle Association convention, Babeu referred to President Obama as “the enemy.”

Babeu’s biggest political cameo came in 2010, when he appeared in a campaign ad for Sen. John McCain (R-Ariz.), who at the time was locked in a tight primary battle with talk radio host and former Rep. J.D. Hayworth. The spot featured McCain and Babeu walking along a completed portion of the border fence in Arizona. After McCain rattled off a list of steps he’d take to secure the border (last step: “complete the danged fence“), Babeu weighs in with his endorsement: “Senator, you’re one of us.”

The spot drew criticism not just from immigration reform groups, but also hard-core conservatives like Hayworth, who highlighted Babeu’s controversial “Cesspool” interview. “McCain needs to renounce the sheriff, pull the ads, and make it clear that this is not the type of campaigning he endorses,” Hayworth said the time. (McCain’s spokesman called Babeu “a respected sheriff fighting on the front lines in Arizona’s battle against drug and human smuggling.”)

Babeu “basically has been flirting with extremist elements in Arizona for some time,” says Frank Sharry, executive director of the immigration reform group America’s Voice.

The Cesspool aims “to grow the percentage of Whites in the world relative to other races.”

Immigration activists say Babeu also has a habit of fudging the numbers on border crime. (Babeu isn’t even a real border sheriff—his jurisdiction actually ends at the Pinal County line, about 70 miles from Mexico.) The Department of Homeland Security has stepped in to counter some of the sheriff’s more hyperbolic statements. In February, Babeu warned that he expected a pitched battle between his deputies and Mexican cartels within 30 to 60 days. No such encounter ever occurred, and DHS secretary Janet Napolitano, the state’s former Democratic governor, was moved by Babeu’s comments to point out that violence along the Arizona border has actually gone down since 2009. Although in press releases Babeu labels Pinal County “the No. 1 pass-through county in all of America for drug and human trafficking,” the Arizona Republic found that claim to be false.

As the Phoenix New Times has documented, Babeu has alleged that Mexican “assassins” have infiltrated his county and are waging a pitched war with bandits that are robbing cartels, and in 2010, he trumpeted an incendiary charge that one of his deputies had been ambushed by a cartel hit-squad while on patrol. (Babeu and his subordinate gave conflicting accounts of the event, none of which held up under scrutiny. Babeu ultimately fired the deputy.) Babeu’s rhetoric has been so over-the-top that the mayors of Arizona’s largest border cities have publicly rebuked him, warning him in a February letter that his antics were unnecessarily scaring tourists and would-be residents away.

Despite the record number of undocumented migrants who have been deported during President Obama’s three years in office, Romney (whose campaign did not respond to a request for comment) has attempted to turn immigration into a wedge issue in his presidential campaign. He’s secured a number of endorsements from anti-immigration politicians, including Alabama Speaker of the House Mike Hubbard, who was recently named co-chair of Romney’s campaign in that state. Hubbard was a key backer of Alabama’s controversial immigration law, key components of which were recently struck down in federal court.

As Sharry notes, Romney could pay for his immigration positions at the polls next November, especially in swing-states with large Hispanic populations like Colorado and New Mexico. Just don’t expect his association with Babeu to become an issue in the Republican primary: Romney’s two closest rivals, Perry and embattled businessman Herman Cain, have solicited the endorsement of Maricopa County Sheriff Joe Arpaio—the original tough-on-crime Arizona cop—who is currently investigating whether President Obama was born in the United States.