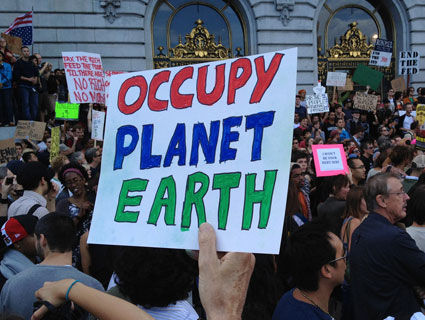 In a recent interview with the BBC, Oakland Mayor Jean Quan let slip that a group of 18 mayors had recently discussed the Occupy protests’ impact in their respective cities during a conference call hosted by the US Conference of Mayors. Quan’s comments immediately touched off speculation that the rash of recent arrests and crackdowns on Occupy protesters—in Salt Lake City, Denver, Portland, Oakland, and lower Manhattan, all within a four-day span, beginning November 12—were part of a coordinated effort by mayors and police departments.

Read Josh Harkinson’s first-hand account from the raid of Zuccotti and check out all the rest of our #OWS coverage.

An official with the US Conference of Mayors confirmed to Mother Jones that, during conference calls on October 13 and November 10, mayors and top police brass discussed the Occupy protests, any “issues of concern” with the protests, and how they’re responding to them. “Included in the discussions have been efforts cities have made to accommodate the demonstrators and maintain public health and safety,” the USCM official said. “Other topics discussed include the costs cities are incurring as a result of the events and the impact on other city service and activities.”

The USCM official, however, denied that there was any coordination or planning between mayors and police officials about breaking up Occupy protests or tearing down encampments.

A spokeswoman for Quan said she didn’t know what exactly was discussed about the Occupy protests on the call. Spokespeople for Salt Lake City Mayor Ralph Becker and the Salt Lake Police Department said they did not participate in the conference call. A spokesman for New York City Mayor Michael Bloomberg and Denver Mayor Michael Hancock also said those mayors did not join the USCM’s calls. Spokespeople for Portland Mayor Sam Adams and Denver Mayor Michael Hancock didn’t respond to requests for comment.

The USCM’s conference calls weren’t the only ones connecting mayors and police chiefs from around the country. As the Associated Press reports, the Police Executive Research Forum held calls on October 11 and November 4, when mayors and authorities discussed dealing with Occupy protesters and their camps. For instance, the officials on these calls warned not to set a midnight eviction deadline, and to fence off a cleared-out encampment to prevent protesters from returning. Here’s more from the AP:

While riot police sweeping through tent cities in Portland, Ore., Oakland, Calif., and New York City over the last several days may suggest a coordinated effort, authorities and a group that organized the calls say they were a coincidence.

“It was completely spontaneous,” said Chuck Wexler, director of the Police Executive Research Forum, a national police group that organized calls on Oct. 11 and Nov. 4. Among the issues discussed: safety, traffic and the fierceness of demonstrations in each city.

“This was an attempt to get insight on what other departments were doing,” he said.

From Atlanta to Washington, DC, officials talked about how authorities could make camps safe for protesters and the community. Officials also learned about the kinds of problems they could expect from cities with larger and more established protest encampments.

In Portland, for example, protests were initially peaceful gatherings. Then the city’s large number of homeless people moved in, transforming the camp into an open-air treatment center for drug addiction and mental illness.

The Atlantic Wire also has a good look at the discussions between mayors and police on dealing with the Occupy protests.

Even if mayors didn’t coordinate their crackdowns, they likely drew support from peers who’d clamped down on the Occupy protests before them. When New York Mayor Michael Bloomberg tried to evict protesters last month, he was the only mayor doing so in a big way—and in the end, Bloomberg backed down. That wasn’t the case on Tuesday night, when cops successfully evicted the Wall Street occupiers—but only after four other mayors and city police officials had busted local Occupy protests elsewhere.

The biggest question is what happens next for Occupy Wall Street. On Tuesday, a judge effectively barred protesters from camping out and sleeping in Zuccotti Park, the focal point of the protest. People were let back into Zuccotti Park at around 5:30 p.m. on Tuesday, but police blocked protesters from bringing in blankets, and only a few dozen protesters ended up staying overnight in the newly cleared park. Members of Occupy Wall Street are now planning how to keep the protest alive and strong without its home in lower Manhattan.