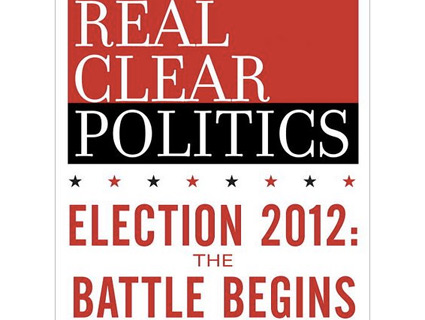 Tom Bevan and Carl Cannon of RealClearPolitics have set a record: They’ve come out with the first Campaign 2012 book, even before any votes have been cast in the Republican primaries.

Welcome to the brave new world of digital political journalism. Bevan and Cannon are electronically releasing their book in thirds throughout the campaign season. When all the dust has settled after E-Day next November, Bevan and Cannon will ponder and revise, and then release a hard-copy version incorporating the first three releases and augmenting the earlier work with fresh reporting. It’s a new model and will, no doubt, be watched closely by the politerati.

Today, the first electronic installment—Election 2012: The Battle Begins—hits. It starts with a detailed history of the improbable origins of the tea party movement and ends with the bursting of the Chris Christie bubble and the tainting of Herman Cain. Bevan and Cannon credit a 24-year-old Ron Paul fan in Binghamton, New York, who in January 2009 organized two-dozen college-age libertarians to rally against a proposed state “obesity tax” on soft drinks, as the Samuel Adams of the modern right-wing movement. The authors make a concerted effort to challenge the criticism that tea partiers have been extreme or, in some instances, responsible for race-tinged assaults on President Barack Obama. (You can judge if they’re being overly charitable.) But they acknowledge that tea partiers, including former congressman Dick Armey and ex-GOP It-Gal Sarah Palin, have often displayed unsettling ignorance of American history.

The book, a product of in-the-trenches reporting, is laced with analysis and peppered with entertaining bits of political gossip. One priceless scene: During a dinner at the Renaissance Hotel in New York City in April 2011, consultant/pundit/accident-waiting-to-happen Ed Rollins told Mike Huckabee, who was then contemplating a 2012 presidential run, that the former Republican Arkansas governor would have to drop 40 pounds were he to join the fray: “Look, I’m a fat man, you’re a fat man, but I didn’t write a book about how I lost a hundred pounds. My political action committee isn’t called HealthPac. You’ve got to get back to running and back on the diet.” Huckabee said little in response. But he ordered a large steak. Afterward, he stopped returning Rollins’ calls and emails.

In reviewing the pasts of the GOP candidates, Bevan and Cannon have dug up some good lines about the wannabes. The moderate incumbent Minnesota Republican state senator defeated by Michele Bachmann in a 2000 race says of her, “Bachmann is the most dishonest, most deceitful person I’ve ever met in my life. She truly is a girl scout with a switchblade knife.” A former chief of staff in Bachmann’s congressional office, Ron Carey, tells the authors that Bachmann is a “mega-narcissist” with “an insatiable appetite for media attention.” Carey reports that a handful of ex-Bachmann staffers once took a vow: If she ever had a viable shot at the nomination, they would “come together as one voice and speak out about why she was not ready to be president.” The book has lots of good dish, particularly about the internal mess of Bachmann’s campaign—which is not surprising. Ed Rollins is a talker. A Newt Gingrich aide notes that the Tiffany’s disaster occurred because Gingrich had to “buy [his wife] Callista off” so she would acquiesce to his presidential bid. “She’s the single worst influence on a candidate I’ve ever seen,” one campaign strategist says. But perhaps the best line in the book comes from Ted Kennedy. Bevan and Cannon remind us that during the 1994 Senate election in Massachusetts, after a debate in which Romney declared, “I’m pro-choice,” Kennedy quipped, “My opponent is multiple-choice.”

This Republican contest has already been a cavalcade of crazy—offering reporters much material. (Some days, it feels as if political journalism is stand-up comedy.) Bevan and Cannon have done an admirable job of probing and assessing the campaign to date. This book, as they say, is “history as it happens.” But—oops!—they may have a hard time keeping pace with all the wacky developments.

You can find their e-book here.