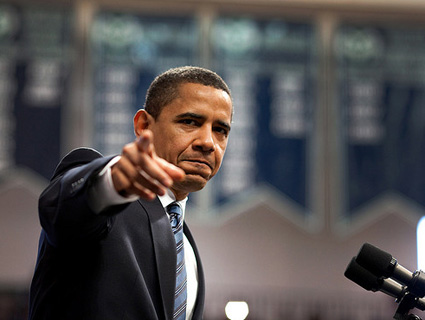 Okay, remember when Democrats and progressives during the debt ceiling showdown last summer were bitching that President Barack Obama was triangulating and wimping out by negotiating (and yielding much) with the tea-party-controlled Republicans? Well, that was then. In the latest twist of this never-ending saga, Obama is both calling out the Republicans and holding what appears to be a position of strength. That may all shift suddenly. This is politics. But Obama’s Democratic fans should savor the moment.

After the supercommittee failed today—announcing that it could not even come up with a proposal for $1.2 trillion in deficit reduction, per August’s debt ceiling compromise—Obama quickly hit the podium at the White House briefing room. He did not blame a dysfunctional Congress, as many commentators rushed to do. He did not adopt the above-the-fray stance he has often attempted to strike (to please those hard-to-please independent voters). Instead, he pointed an accusatory finger at congressional GOPers:

In addition to my [deficit-reduction] plan, there were a number of other bipartisan plans for them to consider from both Democrats and Republicans, all of which promoted a balanced approach. This kind of balanced approach to reducing our deficit—an approach where everybody gives a little bit, and everyone does their fair share—is supported by an overwhelming majority of Americans—Democrats, independents, and Republicans. It’s supported by experts and economists from all across the political spectrum. And to their credit, many Democrats in Congress were willing to put politics aside and commit to reasonable adjustments that would have reduced the cost of Medicare, as long as they were part of a balanced approach.

But despite the broad agreement that exists for such an approach, there’s still too many Republicans in Congress who have refused to listen to the voices of reason and compromise that are coming from outside of Washington. They continue to insist on protecting $100 billion worth of tax cuts for the wealthiest 2 percent of Americans at any cost, even if it means reducing the deficit with deep cuts to things like education and medical research. Even if it means deep cuts in Medicare.

This is the direct approach: Were it not for the extremists of the House Republican conference, there would be a multitrillion-dollar deficit-reduction compromise. This spin has the benefit of being true. Obama, don’t forget, put major entitlement reductions on the table during the debt ceiling negotiations, notably a slight hike in the eligibility age for Medicare and a readjustment in the cost-of-living allowance for Social Security. It’s unclear whether the Democrats would have, at the end of the day, backed him up on this had Speaker John Boehner kicked in sufficient revenue increases to seal the deal. But Obama was at the time leaning on his party’s congressional leaders to support such a compromise—and there were signs he might win them over. Boehner did no such thing with his party. Instead, he walked away from the so-called grand bargain—twice. So when the punditerati push the easy pox-on-both-houses analysis, they’re forgetting this recent history. But Obama, to his credit, is not.

This moment also undercuts a familiar meme: Obama is a lousy negotiator. True, he couldn’t find a way to escape the debt ceiling tar pit created by the hostage-taking Republicans. (I know, hostage takers don’t waste their time creating tar pits.) And he was sucked into an endless series of negotiations that reaffirmed the GOP mantra that deficit-reduction was the top economic priority and that made all participants look ineffectual. But within that context, Obama and his aides might have pulled a fast one on the Republicans. In negotiating the trigger—the mechanism that would kick in if the supercommittee did not produce another round of deficit reduction—they succeeded in getting the Republicans to agree to a potential automatic cut in national security funds of about half a trillion dollars. At the time, Democratic staffers were stunned that GOPers accepted this, for it was obvious that it would drive Republican hawks crazy. (Pushed by Democratic leader Nancy Pelosi, the White House made sure the trigger did not include cuts to Medicaid or the beneficiaries of Social Security and Medicare.)

Without a supercommittee proposal, these autocuts are on the horizon—and they discomfort Republicans far more than Democrats. In his statement tonight, Obama vowed to veto any congressional attempt to undo these national security cuts, which are scheduled to start in January 2013. This places him in the position of Washington’s fiscal enforcer. He will not let Republicans squirm their way out of a hard-and-fast commitment they made to blot up Washington’s red ink.

Even with the supercommittee failure, $1.2 trillion in additional deficit reduction is still scheduled to kick in. Of course, Pentagon-protecting Republicans will try to find a clever escape route, devising, say, legislation they can sell as protection of funding for the troops. But Obama will be in a place where he can say, “A deal’s a deal”—and also offer the Republicans a way out only if they’re willing to raise revenues (or dump the Bush tax cuts for the rich) to cover the military funds they wish to defend.

Republicans are now griping that the supercommittee fizzled because Obama didn’t lead it to the promised land. That’s absurd. He tried hard—perhaps too hard—last summer. And he’s willing to live by the deal he cut with Boehner and Senate Minority Leader Mitch McConnell. (He’s also willing to revive the grand bargain.) He was smart to keep his distance from this destined-to-fail endeavor. It would have been just another sink hole for him, for the Republicans would never have granted significant concessions on revenues. There was no reason for Obama to associate himself closely with another doomed effort. At this point, he can continue to push his balanced approach to deficit reduction (cuts and revenues), which polls rather well; stand with his fellow Democrats, citing their willingness to compromise; and champion a simple principle: sticking to the tough-love deal that he and the Republicans painfully hammered out this summer.

The failure of the supercommittee ain’t so bad for the president.