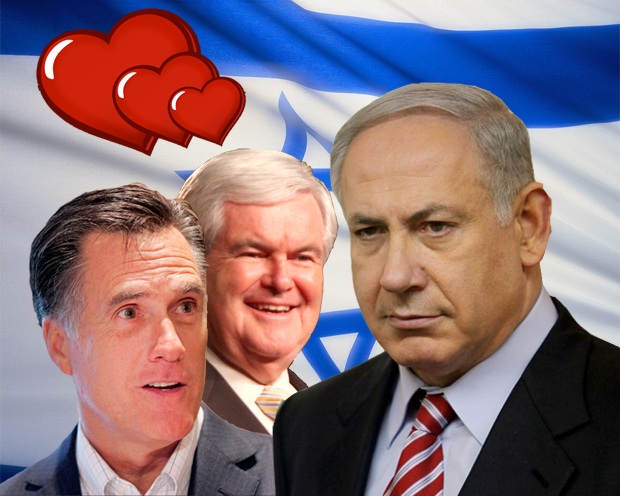 Callista Gingrich, you always knew this time would come.

In Saturday’s Iowa presidential debate, the GOP’s leading men didn’t have their wives on their minds. Instead, they dueled mercilessly for the affections of a different suitor.

The Republican candidates’ latest love is a jowly MIT grad who has a penchant for developing new seaside real estate. It’s Benjamin Netanyahu, the demagogic pro-settlement prime minister whose right-wing coalition clings to power in Israel like John Boehner grips a putter.

Here’s how this lovers’ triangle came together: on Saturday night, Newt Gingrich delivered a two-minute stemwinder (PDF) that called the Palestinian Authority’s leading statesman a terrorist, warned of US-funded textbooks for Arabs that glorify the killing of Jews, and doubled down on his claim that the Palestinians are a “fictional people.”

Romney, sensing he had new competition for Netanyahu’s graces, attacked that last point: “The United States of America should not jump ahead of Bibi Netanyahu and say something that makes it more difficult for him to do his job…If Bibi Netanyahu wants to say what you said, let him say it.”

Romney refused to be out-jockeyed. “I’ve also known Bibi Netanyahu for a long time,” he shot back:

We worked together at Boston Consulting Group. And the last thing Bibi Netanyahu needs to have is not just a person who’s an historian, but somebody who is also running for president of the United States, stand up and say things that create extraordinary tumult in his neighborhood…Before I made a statement of that nature, I’d get on the phone to my friend Bibi Netanyahu and say, ‘Would it help if I said this? What would you like me to do?’

What to make of this suitors’ spat? Sometimes, love can blind you to a person’s faults. Neither Gingrich nor Romney seemed especially interested in Israel, the raucous, largely secular nation of 8 million people represented by 31 political parties. Instead, they focused on Bibi, whose hawkish coalition government can hardly be said to represent all Israelis. (“The more Israel’s image in the world deteriorates, the more Prime Minister Benjamin Netanyahu is flourishing,” Ha’aretz wrote a few months back.)

Romney was so inflamed by pro-Israel passions Saturday night that he basically promised to dial Bibi’s digits before even saying something about the Mideast. (“Would it help if I said this? What would you like me to do?”) Gingrich, for his part, attacked President Obama. “Every day, rockets are fired into Israel while the United States, the current administration, tries to pressure the Israelis into a peace process,” he said, later adding: “We’re not making life more difficult [for Israel]. The Obama administration’s making life more difficult.”

There’s no word yet on whether the duo impressed Netanyahu, but Mohammed Sobeih, the Arab League’s Palestinian affairs chief, criticized Gingrich’s “irresponsible and dangerous” remarks on Sunday.

“If these comments were made for political gains, then this is an even bigger disaster,” Sobeih said. “But it appears that this is a cheap attempt to get more votes in an election. And to get this small number of votes, this person sold America’s interests by denying international law and democratic principles.”