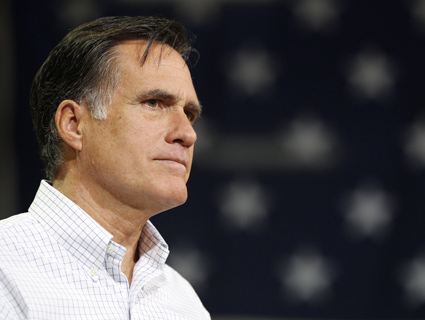 On Thursday, Mitt Romney took arguably the biggest leap of his presidential campaign. Struggling to catch fire with conservative voters, the Romney campaign launched a full frontal attack on Newt Gingrich, who recently displaced the former Massachusetts governor as the presidential front-runner. But Team Romney didn’t blast Gingrich for his messy personal life or his politically inconvenient views on climate change and immigration. Instead, it ripped Gingrich for criticizing Rep. Paul Ryan’s budget plan that would, among other changes, dismantle Medicare as we know it. More importantly, the attack defined Romney as an ardent supporter of Ryan’s hugely controversial proposal.

Romney’s attacks came as no surprise. With the Iowa caucuses three weeks away, he trails Gingrich in numerous state and national polls. His campaign’s attacks on the former House speaker are intended to woo conservative voters in Iowa and New Hampshire and help clinch his party’s nomination. But questions remain amid all the buzz surrounding Romney’s latest move: In trying to define himself, did Romney shift too far to the right by embracing the Ryan plan, when he could’ve bashed Gingrich on less toxic issues? And if Romney wins the nomination, does his embrace of the Ryan plan gift Democrats the ultimate line of attack?

Larry Sabato, director of the University of Virginia’s Center for Politics, says Romney had no choice but to shift hard to the right if he wanted to compete with Gingrich, saying his lock on the GOP nomination “is no longer a sure thing.” But if Romney wins, Sabato adds, his embrace of the Ryan plan could badly hurt him in the general election. “Will embracing Ryan’s Medicare changes give Obama a big opening to go after Romney in the fall?” he says. “You bet.”

Bill Burton, a former Obama White House aide who now runs a pair of pro-Obama independent spending groups, says Romney’s move is “probably one of the most significant issues in the campaign so far.” He adds, “In many ways, his support for the Ryan budget will disqualify him in the minds of many voters.” (A Romney spokeswoman did not respond to a request for comment.)

Romney’s newfound support for the Ryan plan burst into view last week. A Thursday morning press conference with Romney surrogates and a minute-long ad released Friday blasted Gingrich for describing Ryan’s budget plan, a favorite of fiscal conservatives, as “right-wing social engineering.” And at a town hall event in Iowa on Friday, Romney himself echoed the Paul Ryan talking point. “I applauded [the Ryan plan]…We’re going to have make changes like the ones Paul Ryan proposed…and I applaud what Paul Ryan did.”

The Ryan plan, unveiled in April, would cut $4.4 trillion in federal spending over the next decade by repealing President Obama’s health insurance law and curbing domestic and defense spending, while also lowering corporate taxes. Most controversial, though, was Ryan’s plan to tear down Medicare and replace it with a government voucher plan. Critics charged that it would drive up health care costs for seniors and hurt the quality they received compared to government-run Medicare.

Ryan felt the blowback from his plan almost as soon as he’d unveiled it. Angry constituents booed and protested him as well as other GOP lawmakers who supported the plan at events in their districts. Democrats and progressives, meanwhile, seized on the Ryan plan for political gain. The Agenda Project, a progressive advocacy group, cut a now-infamous ad showing a grandmother being pushed off a cliff to dramatize the plan’s “draconian and savage cuts to Medicare.” In May, Democrat Kathy Hochul upset Republican Jane Corwin in a special congressional election in New York’s GOP-friendly 26th District, a win reporters and pundits attributed to the backlash from the Ryan plan. Meanwhile, poll after poll after poll found strong opposition to the plan, and members of Ryan’s own party soured on it.

Romney, for his part, had previously wavered on his support for Ryan’s plan. He has said it sets “the right tone” for entitlement reform, and responded “yes” when asked by ABC News if as president he’d sign the plan into law. (He quickly followed by saying, “His plan is not the plan I’ll put forward; I have my own plan.”) Before last week, Romney strongly promoted his own version of entitlement reform, which wouldn’t fully dismantle the program, instead of outright endorsing Ryan’s plan.

Now, the Romney campaign’s support for the Ryan plan is front and center as the former Massachusetts governor woos Republicans in Iowa and New Hampshire on the eve of primary season. If Romney’s new, more aggressive strategy pays off and he wins the nomination, Democrats will find themselves with yet another line of attack on Romney. They’ve already branded him a flip-flopper, a professional politician, and now, Sabato says, Democrats wanting to attack Romney as too right-wing can say he wants to tear down Medicare, just like they’ve done with Paul Ryan.

Indeed, the challenge facing Democrats is picking the most effective anti-Romney plan and sticking with it, Sabato says. “Will they be better off presenting Romney as inconsistent?” he asks. “Or as too far right and out of the mainstream?”

Burton, the Democratic operative, is the right man to answer those questions, but he declined to preview potential future ads by his Priorities USA groups. That said, Burton left no doubt that Romney’s commitment to the Ryan plan will come back to haunt him. “In the general election,” he says, “it’s going to be devastating.”