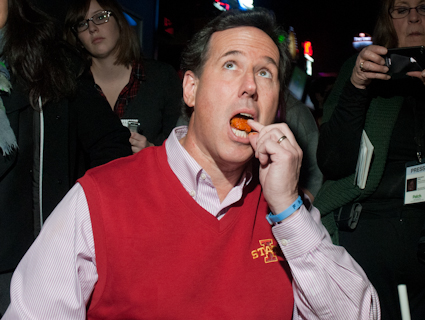 Rick Santorum chomps a wing and catches a glimpse of the Pinstripe Bowl game.<a href="http://motherjones.com/authors/joe-scott">Joe Scott</a>

Rick Santorum visited a crowded Buffalo Wild Wings in Ames, Iowa, Friday afternoon as the Pinstripe Bowl game between Iowa State University and Rutgers played on bigscreen TVs. Most of the restaurant’s patrons paid no mind to the GOP candidate, who has shot to third place in recent caucus polls after a key endorsement from anti-gay activist Bob Vander Plaats and the implosion of rival Michele Bachmann’s campaign. But his sudden relevance won him the attention of dozens of members of the press, who swarmed him as he snaked his way through the crowd to the only open tables in the room.

Between cheers from beer-guzzling football fans, Santorum slammed front-runners Mitt Romney as a liberal Republican with “better hair” and Ron Paul for being in the “Dennis Kucinich wing of the Democratic Party on national security.” The family values right-winger pandered to tea partiers to safeguard his status as social conservative du jour, though members of an anti-abortion group calling itself The Iowans for Life stuck flyers denouncing Santorum as a “Pro-Life FRAUD!!” with a “long and storied history of campaigning for radical pro-abortion candidates for political office” on every car in the lot. 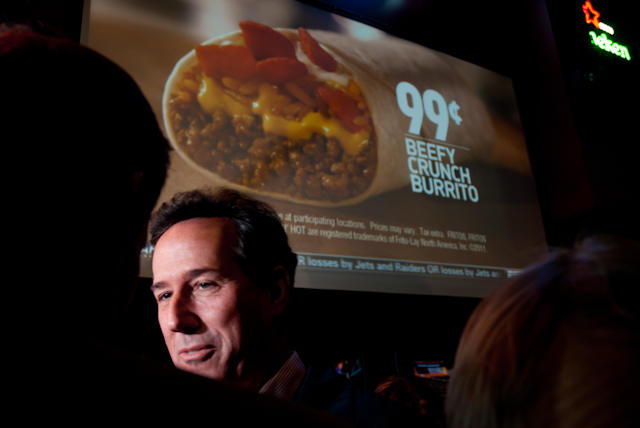 “Get out of the way, there’s a game on!” irritated Iowa State football fans yelled as Rick Santorum, swarmed by the media, blocked their views. Joe Scott

“[Santorum’s rise in the polls] does not reflect well upon us” as a state, Anders Dovre told me as the candidate stood just a few feet away. Dovre, who lives in the town of Slater just a few minutes outside Ames, came to watch the game and didn’t know Santorum would show up, but said he follows politics closely. He voted for Barack Obama in 2008, but plans to caucus for Jon Huntsman on January 3 and said he could maybe support Romney too, but no other Republican. “We’re smarter than this,” he said. “We admitted the first woman to the bar. We have gay marriage in this state. But what are we portrayed as in the national media now? A bunch of bumpkins, meth addicts, and gay bashers.”

But Jeff and Maureen Filmer, two of the few people not affiliated with the media who came to see Santorum, reveled in the circus atmosphere. Obama voters who have since become disillusioned with the president, the couple left their home in Tiburon, California, just before Christmas to spend six weeks on the road following the GOP race. “We don’t believe there’s a perfect candidate,” Jeff said, “but we need a new paradigm.” Although Maureen has an affinity for Ron Paul, both her husband and she agreed that Romney would be the most electable candidate. But they were interested in Santorum’s sudden surge and wanted to hear him speak. They didn’t get much of a chance Friday, with dozens of cameramen occupying the only spots close enough to hear Santorum over the commotion of ISU football fans.

After watching cameras crowd around Santorum eating at a reserved table with his family, Buffalo Wild Wings general manager Bryant Arns remarked, “I’ll take beer and wings over this any day.”