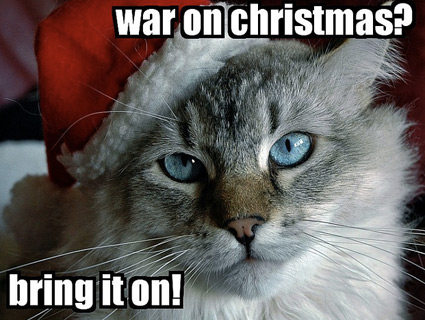 It’s been a frustrating, gruelingly partisan, and very weird year in America. Pizza slinger extraordinaire Herman Cain actually rose to the top of the 2012 Republican presidential crop. The Obama administration felt compelled to assure us that war with alien life forms is not imminent. People freaked out over bestiality in the military. And let’s not forget that Rocky is now being turned into a damn musical.

Surely, this holiday season is set to offer some semblance of calm and harmony, right? A few moments free from the year’s deluge of political cheap shots and cultural mayhem?

Not on your life.

Here’s a round-up of the 2011 Christmas season’s strangest (and most painfully delightful) news stories, including the Michigan-Wisconsin mitten war and Santa Claus’ machine-gun-fest for kids. 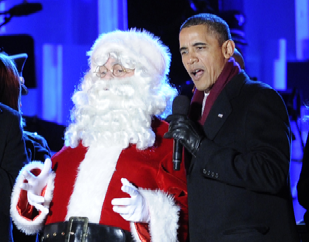 The narrative went something like this: Economic times are tough. Americans deserve a break during the holidays. Americans also deserve affordable prices on their Christmas trees. But the Obama administration is trying to slap on a new tax—on Christmas trees! Huh. Obama must really hate Christians, then. And Jesus. And America, too. Typical Kenyan Muslim. Aghghghahagh!!!

Just because the Obama Administration has the legal power to impose its Christmas Tree Tax doesn’t mean it should do so.

The economy is barely growing and nine percent of the American people have no jobs. Is a new tax on Christmas trees the best President Obama can do?”

Basically, this is the Jesus-Bday version of the $16 muffin: Beyond the phony outrage and some mangled facts, move along people, cause there’s no reason for indignation here. The plan for the grossly misunderstood 15-cent fee came fully endorsed by the National Christmas Tree Association and was originally devised by tree retailers and tree farmers before the president took office. So if the White House really is prosecuting a War on Christmas, brandishing the Internal Revenue Service as its weapon of choice, then this covert op was hatched under George W. Bush. 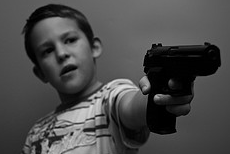 [T]his year, it’s gun rights advocates who are offering the most twisted take on a Christmas tradition. Fox 5 News [in Phoenix, AZ] reports that the Scottsdale Gun Club is inviting people to enjoy “Santa and Machine Guns” — a “family event” that lets kids take a holiday card picture with St. Nick and an assortment of high-powered fire arms. Families can choose from pistols, modified AR15’s, an $80,000 Garwood minigun and more. More disturbingly, they’re encouraged to test out the machine guns. Video and pictures from the event show that young children often wield weapons larger than they are.

The Fox 5 report quotes club member Richard Jones, who insists that “[w]hether you’re a gun advocate or not, you should have a lot of fun with it.”

Am I the only one who thinks that this will predispose these children to mature into a bunch of Bad Santas?

There was a time when I considered this to be the greatest use of AP column space ever. I stand corrected:

Michigan and Wisconsin have thrown off the gloves in a hand-to-hand combat over which of them looks more like a mitten.

“Hey, Wisconsin, get real!! The Mitten is ours!!” tweeted one Michigan resident upset the state across Lake Michigan is trying to usurp a shape so iconic it can be picked out by orbiting spaceships. Noted another, “Only one state has Mitten Mojo!”

Alex Beaton of the Awesome Mitten website spotted the knit mitten shaped like Wisconsin on the Travel Wisconsin website this week and kicked off the bare-knuckled offensive against what she saw as a mitten impostor.

Only one state can be the mitten-est.

“People in Michigan, we do identify ourselves so closely with the Mitten State,” Beaton said of the state’s Lower Peninsula. “We’re America’s high five!”

The AP story—cutely titled “Michigan gives thumbs-down to Wisconsin mitten campaign”—coincided splendidly with the mitten-ready winter holiday. It goes on to describe the efforts of Wisconsinite Tom Lyons, who insists that “Wisconsin is the left mitten. Michigan is the right mitten. Even children know that one mitten doesn’t cut it when it comes to Midwest winters.” Lyons claims that (no joke, I think…) “he often holds up his left hand when locating state places for others.”

I’m holding out for a Michigan State Braveheart remix, as long as it includes the line, “They may take our lives, but they’ll never co-opt OUR MeeeeeeEEETTTENSssssSSS!!!!”

You’ve been sleeping on the streets for two months pleading peacefully for a new spirit in economics. And just as your camps are raided, your eyes pepper sprayed and your head’s knocked in, another group of people are preparing to camp-out. Only these people aren’t here to support occupy Wall Street, they’re here to secure their spot in line for a Black Friday bargain at Super Target and Macy’s.

Occupy gave the world a new way of thinking about the fat cats and financial pirates on Wall Street. Now lets give them a new way of thinking about the holidays, about our own consumption habits…[Let’s] launch an all-out offensive to unseat the corporate kings on the holiday throne. This year’s Black Friday will be the first campaign of the holiday season where we set the tone for a new type of holiday culminating with #OCCUPYXMAS.

That was from Vancouver’s Adbusters, the editorial crew that helped kick off Occupy Wall Street. The phase #OCCUPYXMAS was scheduled for November 25-26, along with “consumer fasts,” “Santa sit-ins,” flash mobs, and a general huge inconvenience to holiday shoppers and check-out lines. Predictably, the effort to #OccupyXmasPresentsThatKeepMyChildrenSane didn’t have an impressive turnout. This clip (and a crop of others) illustrates why:

5. Santa Claus Dangles From a Mall Rooftop, Traumatizes The Children

This story about a rent-a-Santa in Florida might very well top the list of “things that weren’t in the job description.” Here’s some background from the Daily Mail on an incident that took place in late November:

A man dressed as jolly old St Nicholas was supposed to make a grand entrance at a mall in Palm Beach Gardens, Florida.  Instead, he managed to get his beard tangled in the rope, losing the beard—and his hat—entirely. It was trouble from the get-go when Santa hesitated and fumbled before clumsily going over the ledge.

An elven helper tried to get him off to a good start. What followed was nearly three minutes of Santa—still suspended in mid-air—trying to descend down to the stage after his beard got tangled in the rappelling equipment. The elf looked on, helpless at Santa’s plight. A lone child hopefully cried out: “Santa!” Two announcers commenting on the event didn’t help the awkward entrance.

“Everybody cheer, everybody cheer Santa on!” the female announcer said to the crowd. “I think if you guys sing nice and loud, you can help Santa come down!”  She also told the horrified children: “Magic can happen!” She encouraged children to sing along with a rendition of “We Wish You a Merry Christmas.”

Enough talk; sit back and watch the holiday awfulness unfold:

Europe has a lot on its plate: There’s the euro crisis with its massive international implications. The whole Putin/voter-fraud thing. And the James Murdoch affair is bubbling up, yet again.

But the worst of the lot? I’m going with the Norwegian butter catastrophe. AFP reported early last week: 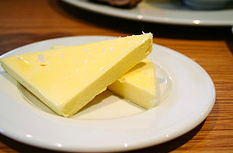 An acute butter shortage in Norway, one of the world’s richest countries, has left people worrying how to bake their Christmas goodies with store shelves emptied and prices through the roof.

The shortfall, expected to last into January, amounts to between 500 and 1,000 tonnes, said Tine, Norway’s main dairy company, while online sellers have offered 500-gramme packs for up to 350 euros ($465). The dire shortage poses a serious challenge for Norwegians who are trying to finish their traditional Christmas baking — a task which usually requires them to make at least seven different kinds of biscuits.

The shortfall has been blamed on a rainy summer that cut into feed production and therefore dairy output, but also the ballooning popularity of a low-carbohydrate, fat-rich diet that has sent demand for butter soaring. “Compared to 2010, demand has grown by as much as 30 percent,” Tine spokesman Lars Galtung told AFP. Last Friday, customs officers stopped a Russian at the Norwegian-Swedish border and seized 90 kilos (198 pounds) of butter stashed in his car.

7. The Mailman Wants To Kill Christmas, Too?? 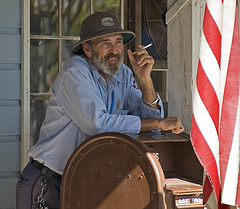 Grinch, 2.0Yes, that does appear to be the case, according to the good folks at the Family Research Council. On December 14, the office of FRC president Tony Perkins blasted out the following press release:

Last Saturday, FRC’s own J.P. Duffy was waiting in line with his family at a Maryland post office when three Christmas carolers entered to sing for the longsuffering customers.

The carolers were quickly silenced, however, by an angry postal manager who instructed them to immediately leave the premises, citing that they were in violation of a “no-solicitation policy.” Despite jeers from the postal patrons, the manager never relented, causing the carolers to take their cheer elsewhere.

Fox News reporter Todd Starnes followed up on the story and received confirmation that the United States Postal Service does indeed ban Christmas carolers. Such a ban on Christmas caroling is antagonistic toward the long-held Christmas traditions of the American people, and is an unnecessary affront to patrons who use the post office daily to send Christmas cards and packages.

8. Rick Perry Really Does Make This Too Easy

By now, you might have heard that this campaign ad has attracted more Internet hateration than your average Justin Bieber YouTube video. The resulting meme is totally well-deserved:

I’m not ashamed to admit that I’m a Christian. But you don’t need to be in the pew every Sunday to know that there’s something wrong in this country when gays can serve openly in the military but our kids can’t openly celebrate Christmas or pray in school. As president, I’ll end Obama’s war on religion and I’ll fight against liberal attacks on our religious heritage.

As our own Tim Murphy puts it: “What is this war on religion, anyway? Did Congress authorize it? How is it being paid for? If Rick Perry is a Christian and President Obama is at war with Christians, can Obama detain Perry indefinitely without trial?”