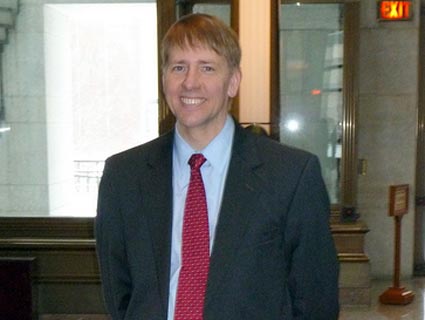 President Barack Obama has finally done something that makes even the Bush administration attorneys who helped craft the legal rationales for torture, warrantless wiretapping, and indefinite detention tremble with fear: Last week, he made recess appointments to the National Labor Relations Board and the Consumer Financial Protection Bureau.

The Constitution allows for the president to appoint people to positions that normally require Senate confirmation while Congress isn’t in session (“in recess” in Washington-speak). In an effort to prevent Obama from making those appointments while they’re on break, Republicans in Congress have been forcing seconds-long “pro-forma” sessions featuring no actual work. Last week, the White House decided to make the appointments anyway.

David Addington, the former legal counsel to then-Vice President Dick Cheney who helped construct the legal justifications for Bush-era torture policies, argued the president had the “inherent” authority to ignore federal law when spying on American citizens, and put forth the novel view that the vice president’s office is not a part of the executive branch and therefore not subject to congressional oversight, told the New York Times that Obama’s recess appointments were “flabbergasting and, to be honest, a little chilling.”

John Yoo, the former attorney with the Bush-era Office of Legal Counsel who suggested the president could order a child’s testicles crushed, massacre a village of civilians or unilaterally suspend free speech in the event of a terrorist attack, also fears for the future of the republic if the president is able to bypass Senate procedural gimmicks meant to block recess appointments. At National Review, Yoo attacks Obama for his “abuse” of executive power in appointing Richard Cordray to head the CFPB.

There’s a genuine legal argument over whether or not Obama has the authority to make recess appointments when the Senate is in pro forma sessions, even those explicitly designed to foil such appointments. As the New York Times‘ Charlie Savage has written, the appointments raise a number of questions: Whether the Senate is technically in session when it is incapable of conducting business, and what should happen when the Senate’s constitutional authority to make its own rules clashes with the president’s constitutional responsibility to keep the federal government running properly. At the very least, Democrats may come to regret setting this precedent when Republicans regain control of the White House, which could be very soon.

But John Yoo and David Addington are not good people to make these arguments. Watching two men who argued for years that the president could pick and choose which laws to follow wring their hands over Obama’s recess appointments as an abuse of power is so absurd that one practically has to reach into fiction to find parallel analogies. If we could only get Lex Luthor’s feelings on financial regulation or Emperor Palpatine’s thoughts on the importance of checks and balances.