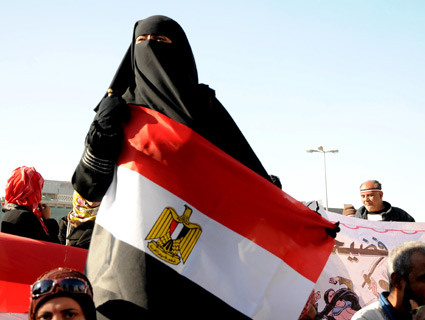 One year ago, as plans for a mass demonstration against Hosni Mubarak’s regime circulated on the internet, Egyptians speculated about what might happen on January 25. Would it be yet another futile effort, easily quashed by security forces, or a legitimate challenge to the octogenarian kleptocrat’s rule? No one could’ve predicted, of course, what came next: an 18-day uprising culminating in the overthrow of one of the most powerful strongmen of the Middle East. Now, after a rocky year of military rule, marked by the country’s freest and fairest parliamentary elections in decades and frequent spasms of street violence, uncertainty is once again in the air. Here are five key things to watch for as massive crowds flood Egypt’s streets and squares on Wednesday:

1. How will the military respond?

Over the past year, the military—in particular, the ruling Supreme Council of the Armed Forces—has gone from respected to reviled among many revolutionaries. After promising to midwife a swift transition to civilian democracy, it has earned the ire of many Egyptians with its brutal crackdowns on dissent and glacial pace of reform. In Cairo and other major cities, anti-SCAF graffiti is plastered on alley walls and facades of government buildings. Even so, SCAF has announced plans for grandiose celebrations on the 25th to commemorate its role in the revolution, replete with martial displays, concerts, and ceremonies to honor officers. After a deadly showdown between military police and protesters killed at least a dozen civilians in December, the military has kept a low profile. An ostentatious return to the spotlight could trigger renewed violence.

The throngs in the streets will be driven by various agendas. Some will simply wish to celebrate the anniversary. But activist groups—many of whom are calling for a “second revolution”—plan to use the 25th to press their demands for an expedited transition to civilian rule. (As of now, the military leadership is slated to cede executive power by July 1, following the presidential election in June.) To draw any momentum from the day, they’ll have to walk a fine line—on the one hand preventing the day from becoming a military pageant show, on the other, suppressing the militant urges within their own ranks. Violent clashes in November and December cast a bad light on the revolutionary crowd for many Egyptians, who view its continued agitation as unnecessarily destabilizing. They risk losing support if things get ugly.

3. Turnout will be critical.

During the heady days of the revolution, up to 8 million Egyptians turned out to protest. Since then, activists have failed to muster a tenth of that. Near-daily protests in Cairo over the last month have tended to draw in the low hundreds. The paltry numbers have led military leaders to confidently claim that they enjoy the backing of the so-called silent majority of Egyptians. If January 25 is to precipitate meaningful concessions from the junta about the timing of the presidential election or the economic and political privileges it hopes to retain after the transition, activists will have to prove themselves capable of summoning numbers unseen since last February.

4. What about the Brotherhood?

The Muslim Brotherhood has kept its intentions for the 25th close to the vest. After dominating parliamentary elections—taking 47 percent of the seats in the lower house—it is reluctant to risk confrontation with the military, especially with Parliament having convened for the first time on Monday. In November, it sat out deadly clashes in Tahrir Square on the eve of the elections, wary of offering any pretext to postpone voting. In early January, it announced its support for the military’s six-month transition timetable. Still, the Brotherhood is reluctant to skip out on the action altogether lest it bolster the impression that it’s in the military’s pocket. Its leaders have indicated in recent days that it may take a more active role. They are reportedly debating whether to accept an invitation from a coalition of activists to partake in demonstrations; as Egypt’s largest and best-organized political organization, the Brotherhood would lend the protests a powerful shot in the arm.

Among Egyptian political analysts, the growing consensus is that economic factors will trigger the next big bout of unrest: 40 percent of Egyptians live on less than $2 a day. Youth unemployment stands at 25 percent. While many analysts still believe that a major crisis is not imminent, mysterious fuel shortages in the last couple weeks—leading to long lines at gas stations—have raised the specter of an eruption sooner than later. It’s not likely to come on the 25th, but festering economic discontent may well fuel an already volatile situation.

Want to track the action as it happens? Al Jazeera English’s live stream and the Guardian‘s Middle East live blog are your best bets. Also follow the Twitter handles of reporters Bel Trew (@beltrew), Omneya el-Desouki (@omniaaldesouki), and Adam Makary (@adamakary) for updates from the ground.  The #Egypt, #Jan25, and #Tahrir hashtags should come in handy as well. And if you need a refresher on what the fuss is all about, check out our explainer from last winter, where you’ll find a blow-by-blow account of the uprising and its aftermath.