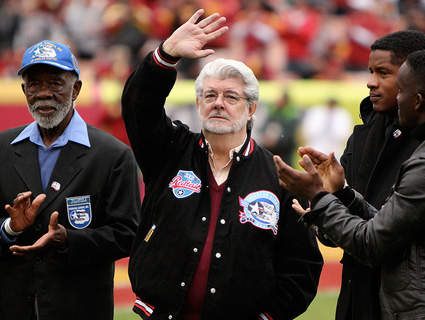 After Jar-Jar Binks, it’s hard to not to give George Lucas’ new film, Red Tails, the side-eye. The movie is a World War II-era action flick based on the Tuskegee Airmen, the heroic and decorated pilots who were the first black servicemembers to fly combat missions at a time when black Americans were not recognized as full citizens in the United States, despite their willingness to fight and die in its defense.

In an interview with The Daily Show‘s Jon Stewart on Monday night, Lucas was frank about the trouble he had getting the film made—in part, he said, because the studios weren’t willing to finance a film without a white protagonist as an anchor.

“This has been held up for release since 1942, since it was shot; I’ve been trying to get released ever since,” Lucas joked—although he did say that the film took about 23 years to develop. “It’s because it’s an all-black movie. There’s no major white roles in it at all…I showed it to all of them and they said, ‘Nooooo. We don’t know how to market a move like this.'” Lucas goes on to explain that major studios don’t believe films with majority black casts do well in foreign markets. Lucas was unbowed, telling Stewart that “we do want to do a prequel and a sequel,” which I take as a measure of how excited and proud about Red Tails Lucas actually is. Bonus exuberance: “This is the closest you’ll ever get to Episode Seven.” Here’s the video:

Lucas’ explanation of how difficult it is for films with mostly black casts (let alone black directors) was one of my major frustrations watching Pariah, director Dee Rees’ excellent coming-of-age film about a black lesbian teenager in Brooklyn. It wasn’t just that the movie was good, it was that lingering social attitudes about race make such films far rarer than they should be, in part because of the way they skew economic incentives for major studios. Lucas gets a little big for his britches when he disses the 1989 Civil War epic Glory by describing it as a film where “you have a lot of white officers running these guys into cannon fodder,” implying that in comparison to the Massachusetts 54th Regiment the Tuskegee Airmen were “real heroes.”

The derision here is unnecessary and unwarranted; the men of the 54th were certainly heroes, and though it is hard to imagine, were fighting to preserve a nation that thought even less of them than it did of the Tuskegee Airmen. Also, there’s maybe a 0.0001 percent chance that Red Tails is actually a better movie, though Lucas’ point about Hollywood’s aversion to making films that don’t center around white protagonists is well taken. The issue here is as political as it is economic—the white protagonists’ role in mostly black films is generally to act as a redemptive vehicle for the white audience, allowing them to believe that in another place, at another time, they would have been just as righteous. Whether we’re talking about the men of the 54th or Capt. Robert Gould Shaw, we are speaking of a kind of courage that is present in vanishingly few people. It is however, a conceit that studios seem to view as necessary to fill seats.

After watching Lucas’ interview with Stewart, I’m more likely to see the movie than before. It’s hard to forget the galactic coonery of Jar-Jar Binks. On the other hand, one of the screenwriters for Red Tails is Aaron McGruder, the writer behind the newspaper comic strip turned TV show The Boondocks. When the Star Wars prequels were first released, McGruder justifiably blasted Lucas over Jar-Jar from the perspective of a Star Wars fan. Lucas then hired him to write a movie. It’s not quite enough to get me to forgive him for ruining the original Star Wars trilogy, but it’s enough to get me to want to see Red Tails.