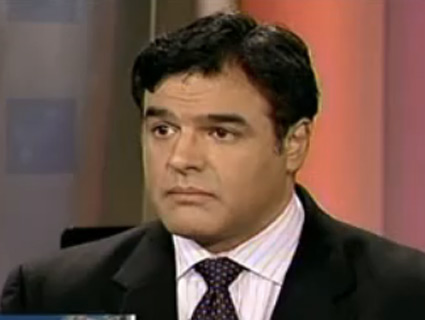 Kiriakou began making the media rounds in late 2007, when he went on the record about waterboarding techniques used in the War on Terror, particularly in connection to the torture of Abu Zubaydah in a secret prison in Thailand. (It was later revealed that Kiriakou was not actually present for that interrogation, as he had previously implied.)

If you’ve been reading Mother Jones, a lot of the content in the criminal complaint against Kiriakou will seem familiar. The main charges stem from a bizarre episode we reported on a couple years ago: In 2008 or early 2009, attorneys for alleged 9/11 conspirators held at Guantanamo Bay obtained—and showed to their clients—photo lineups that included pictures of CIA officers and contractors. The source of the photos was John Sifton, a private investigator working for the American Civil Liberties Union’s John Adams Project, an outfit set up to provide civilian defense lawyers to the Gitmo defendants. In some cases, Sifton clandestinely photographed CIA officers who were thought to have been involved in the brutal interrogations of the 9/11 defendants.

The purpose of presenting the photo lineups to the detainees was to identify the alleged torturers in order to make the case that the detainees’ statements were coerced. As multiple sources told Mother Jones in 2010, the defense lawyers didn’t know which of the individuals in the photo lineups were believed to be CIA officers. The detainees, meanwhile, would have no way of knowing which of the people were CIA employees unless they recognized them from interrogations. The lineups were “double blind,” a fact confirmed in the criminal complaint.

But there was still the issue of how Sifton identified the people he thought were involved in the interrogations. That’s where Kiriakou comes in: He’s accused of providing the identities of several CIA officers to journalists, one of whom passed information on to a “defense investigator” whose activities match Sifton’s. (The complaint specifically mentions investigators “interviewing” the “defense investigator” and uses the phrase “learned from the defense investigator.”) Here’s the key paragraph of the criminal complaint:

No law or military commission order expressly prohibited defense counsel from providing their clients with the photographic spreads in question under these circumstances. However, the fact that a defense investigator had learned the classified information, including the information necessary to take and/or assemble these photographs, suggested that the information may have been either deliberately or inadvertently disclosed, without authorization, in a manner that ultimately resulted in the defense team’s possession of the classified information.

The CIA didn’t take long to find out about Sifton’s work. In the spring of 2009, some of the photos were discovered in the cell of Mustafa Ahmad al Hawsawi, an accused Al Qaeda financier and one of 9/11 mastermind Khalid Sheikh Mohammed’s four co-defendants. The criminal complaint against Kiriakou also indicates that a defense filing in early 2009 contained classified information that the government hadn’t provided to the defense.

When the CIA found out about the photos, top intelligence officials were furious, believing the defense lawyers had potentially placed the lives of covert officers at risk. The CIA’s then-general counsel John Rizzo demanded an investigation. He later described the incident as “far more serious than Valerie Plame,” referring to the Bush-era leak of an operative’s covert status. Rizzo wasn’t alone in his concerns. “This is an agency that has reasons to be concerned as to whether or not somebody’s got their back,” another high-ranking former intelligence official told Mother Jones. “It’s always operating out there on the edge, not unlawfully, but generally at the farthest reaches of executive prerogative.”

In response to the CIA’s complaints, the Justice Department launched a probe, but the agency and congressional Republicans were unhappy with the results of the first investigation, which looked likely to clear the Gitmo defense lawyers of wrongdoing. Then the Obama administration called in famed US Attorney Patrick Fitzgerald, who handled the Plame investigation and prosecuted former Illinois governor Rod Blagojevich, to take over the probe.

Sifton and his lawyer did not respond to requests for comment.

The charges are just the latest crackdown by the Obama administration on alleged leakers. This is the sixth time during the Obama administration that prosecutors have filed charges pertaining to the unauthorized disclosure of classified national security information to media outlets. (In the previous four decades, the US government has pursued such cases on only three occasions.) Under the Espionage Act, the Obama administration has gone after media sources including Stephen Kim, an arms expert accused of passing along classified information to a Fox News reporter; NSA whistleblower Thomas Drake (who was profiled in an exhaustive New Yorker story by Jane Mayer), and alleged Wikileaks source Bradley Manning, among others.

The ACLU, which faced the first criminal investigation in its 92-year history, was “relieved” to hear that it’s no longer a target of Fitzgerald’s probe, Anthony Romero, the group’s executive director, told Mother Jones on Monday. “I can’t underscore for you enough the great indignation with which we reacted to the commencement of this investigation,” Romero added. “It was breathtaking that the ACLU was subject to a criminal investigation for our activism on behalf of detainee rights. It was a massive investment of money, time, and resources and government lawyers were barking up wrong tree.” Asked whether the organization regretted its actions in the Sifton affair, regardless of their legality, Romero stuck to his guns. “Those actions were entirely necessary to provide zealous defense to the accused, many of whom were charged with capital offenses,” he said. “If we had to do it all over again, we’d do it exactly the same way.”

You can read the criminal complaint against Kiriakou below. Note that we’ve identified Journalist B (the New York Times‘ Scott Shane) and Officer B (former CIA interrogator Deuce Martinez). That’s clear because the complaint identifies the title of the article that is allegedly based on Kiriakou’s disclosures. (It’s worth noting that the contents of the complaint are allegations and neither Shane nor Martinez is charged with a crime.) Shane and the Times declined comment.