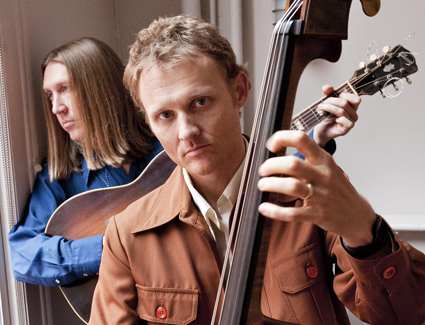 Chris and Oliver Wood hadn’t played music together since childhood, but that all changed one night in 2004. Oliver’s funky rock band King Johnson had opened a gig in Winston-Salem, North Carolina, for his kid brother Chris’ far-out fusion trio Medeski Martin & Wood. At some point during the headlining act, as Chris plucked lustily at his upright bass, Oliver carried his guitar onstage, plugged in, and melted into the sound.

Despite the brothers having spent years in the musical trenches, it had taken this long for them to strike a chord as professionals. But they share the sort of uncanny chemistry usually only found between veteran bandmates: John and Paul, Miles and Coltrane, Simon and Garfunkel, and now Chris and Oliver. “It was like watching myself play,” Chris said at the time. Oliver calls it “a certain telepathy…a supernatural, psychic kind of thing.”

Fast forward to last Saturday night at the Great American Music Hall in San Francisco, and it’s clear there’s still no static in that psychic connection. After the Winston-Salem show, the brothers whipped up a demo of Oliver’s soul-saturated roots-folk songs, sent it off to Blue Note Records, and the Wood Brothers were born. Their 2006 debut album, Ways Not To Lose, was an invigorating reminder of the understated power of the duo; NPR called it one of the year’s top “overlooked” albums. Last week, the brothers kicked off a national tour in support of their most recent album, August’s Smoke Ring Halo. Along for the ride is another sibling duet, Winnipeg’s Sarah and Christian Dugas, a howling chanteuse with a dark blue melodic sensibility and her rhythm guitar-picking brother.

Oliver sat on a stool within arm’s reach of his brother, a sunburst hollow-body electric guitar propped on one knee and a doughy face peeping from behind shoulder-length blond locks. He takes a light touch to his instrument, fingers casually brushing the strings, but you’d never know it from the sound: loud, unapologetic, jamming big major chords. The Wood Brothers have their share of good old-fashioned heart-achin’ love songs, too, and Oliver can croon like a lonesome Georgia hound at midnight, but even then there’s a raw edge that cuts out any suggestion of the sleepy-eyed country balladeer.

Chris, with his tall wiry frame and close-cropped hair, leans aggressively on his well-loved upright, pulling percussive tones hard out of the strings; he knows precisely how much physical abuse the instrument will tolerate and seems to enjoy toeing that line. At the edge of the stage, a percussionist (an increasing presence in the Wood Brothers’ sound these days) pounded on the “shit-tar,” a modified acoustic.

The brothers both got their start jamming the Beatles and Bob Dylan alongside their folkie dad at home in Colorado. Oliver got his first acoustic guitar as a gift at age 10, but found it too hard to play and switched to electric bass. When the sounds of Jimi Hendrix and BB King left him itching for six strings again, he handed the bass down to Chris, who took to it with abandon. They learned rock covers together and practiced improvising on the 12-bar blues, but soon Oliver left home and their paths diverged.

Chris took his bass to the New England Conservatory, studying jazz and eventually landing in New York City, where he met pianist John Medeski and drummer Billy Martin and with them launched one of the most successful contemporary experiments in improvisational music. Oliver dropped out of college to follow a few bandmates to Atlanta, where he got a gig playing rhythm guitar with bluesman Tinsley Ellis, and eventually launched King Johnson (named after BB King and Robert Johnson). Their travels immersed each brother in a unique stew of musical influences, but Oliver says that fundamentally they were still both turned on by the same kinds of American roots music. “We all listen to the same roots, even though we interpret them in different ways,” Oliver told me.

The brothers show no signs of slowing down. A fourth studio album is in the works, and Oliver says he and Chris plan to record some tracks this spring at the upstate New York barn studio of drummer Levon Helm, formerly of the Band. At Saturday night’s show, old tunes from their first album blossomed into unique improvisations, pushing and pulling with tempo and form, demonstrating that the brothers’ are a natural musical match. “It’s not that far-fetched that we would get together,” Oliver says. “And it works.”