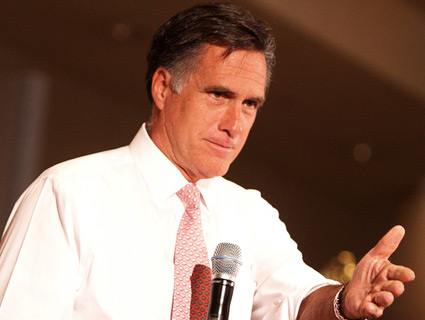 “I get speakers fees from time to time, but not very much,” Mitt Romney said last week of his six-figure public speaking income. His foes seized on the gaffe as further evidence of Romney being out of touch with average Americans, but there’s another reason for him to downplay the payments, which totaled to $374,000 for nine speeches in 2010—an average of $41,592 per appearance. (Newt Gingrich reported receiving a total of $21,625 in speaking fees and Rick Santorum reported none.) The high payments raise questions about what the groups who hired these pols might expect in return. Here’s a rundown of speeches Romney and Gingrich have disclosed.

Quest Educational Foundation (Naples, Florida)
$35,771
An educational nonprofit that offers tutoring and test-prep services, Quest also has a political side. Its website claims affiliations to libertarian groups such as the Cato Institute, Ludwig Von Mises Institute, and Ayn Rand Institute. Its chairman, C.E. Dekko Jr., is an executive with Group Dekko, a multinational manufacturing company that makes everything from truck parts to medical devices. Over the years he has donated $167,297 to political candidates and parties, almost all of it to Libertarians and Republicans.

Riverside Theatre (Vero Beach, Florida)
$20,000
While traveling the country to hawk his book in 2010, Romney typically spoke to crowds for free. But he was so popular in conservative, affluent Vero Beach that the local theater decided to charge for tickets and give Romney a cut. Happy to play along, Mayor Kevin Sawnick gave Romney a key to the city.

Claremont McKenna College (Claremont, California)
$11,475
About two weeks earlier, Romney had spoken to students at Emory University for free. But he was brought to Claremont McKenna through the university’s Pacesetters Fellowship Program, which “attracts leaders in business, academia, and public affairs” by giving them money.

Get Motivated Seminars (via satellite from Boston)
$29,750
The Weekly Standard calls Get Motivated “a quasi-Christian self-help operation” in which “the company makes money both from ticket sales and by letting pitchmen hawk personal improvement and get-rich-quick products during the interludes between the star speakers”—including the likes of Zig Ziglar, Brett Favre, and Sarah Palin.

HP Healthcare Services (Dallas)
$32,831
This lucrative consulting arm of the HP computer empire, which offers “a comprehensive digital health solution” to hospitals and medical providers, may have been attracted to Romney for his role in creating state-run healthcare in Massachusetts.

International Franchise Association (Las Vegas)
$68,000
“Mitt Romney’s broad experience in business, government and politics will provide critical insight for IFA members as we continue to position our companies for growth in a challenging financial climate,” IFA Chairman Ken Walker said in announcing that Romney would keynote the IFA’s 51st annual convention. The IFA promotes the global spread of chain stores like Burger King and Pizza Hut.

American Family Association
$6,000 (estimate)
Gingrich’s financial disclosures, which note three separate $2,000 payments, don’t specify precisely how Gingrich earned the money from this anti-gay Christian group, but his tax return suggests that at least some portion was compensation for public speaking. The AFA, which the Southern Poverty Law Center considers a “hate group,” was also behind Texas Gov. Rick Perry’s prayer festival in Houston.