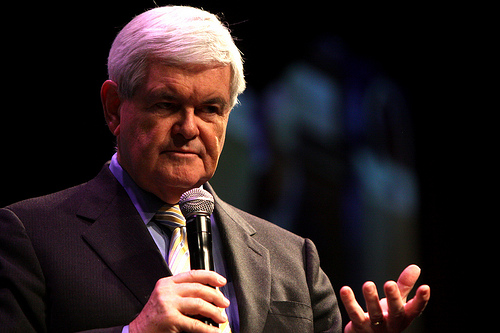 Perhaps it’s lack of sleep, or perhaps he realized that his above-the-fray strategy was failing to dampen Mitt Romney’s aura of inevitability in New Hampshire, but Newt Gingrich flashed his fangs early in Sunday’s NBC News/Facebook debate. After Romney exceeded his allotted time, emphasizing—as he has throughout the campaign—that he is not a career politician but a businessman whose conscience called him to service, Gingrich erupted: “I realize the red light doesn’t mean anything to you because you’re the front-runner. But can we drop a little bit of the pious baloney?”

The fact is you had a very bad re-election rating. You dropped out of office. You had been out of state for something like 200 days preparing to run for president… You were running for president while you were governor. You were gone all over the country. You were out of state consistently.

Then, after coming out strong and showing a glimpse of classic, brawling Gingrich, the former House speaker reverted to his positive, professorial pose.

Since placing fourth in Iowa in the wake of a slew of attack ads launched by a pro-Romney super-PAC, Restore Our Future, Gingrich has vowed he would not go negative. He has vowed, however, to “engage in great clarity,” as he put it the other day during a town hall meeting in Salem.

But while Gingrich may be reluctant to put his pugilistic side on full display, now, thanks to Sheldon Adelson, he may be able to leave most of the body blows to his surrogates. News broke on Saturday that the casino mogul had donated $5 million to a pro-Gingrich super-PAC, Winning Our Future, run by former Gingrich aide Rick Tyler. Winning Our Future is planning to roll out a blistering, 27-minute movie eviscerating Romney’s record at Bain Capital. “I’m trying to save the people of New Hampshire from being embarrassed,” Tyler told NBC. “When they see this movie, and see what a predator Romney is, they’re going to be embarrassed.”

Near the end of the debate, moderator David Gregory raised the escalating super-PAC wars, asking Gingrich whether his complaints about Restore Our Future’s Iowa ads weren’t hypocritical given the movie produced by the super-PAC backing his own candidacy. “I’m consistent because I think you ought to have fact-based campaigns,” Gingrich responded.

Romney defended the ads launched by Restore Our Future, which is run by former Romney campaign staffers. He added, however, “Anything wrong I’m opposed to.”

Gregory pointedly asked the candidates whether they would both ask their respective super-PACs to cease the attacks. Predictably, neither Gingrich nor Romney signaled that they would call for a super-PAC detente. “I agree with him: it takes broad shoulders to run,” Gingrich remarked, referring to Romney’s recent comments criticizing Gingrich for “whining” about the super-PAC onslaught.

So at least they agree on something.