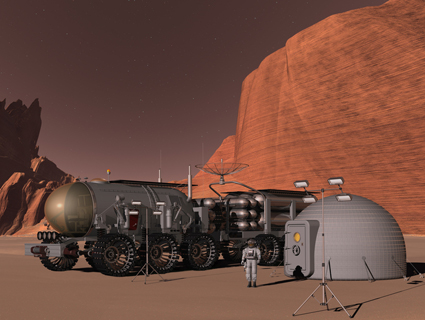 A polling station in the early primary state of Mars, circa 2132<a href="http://www.shutterstock.com/cat.mhtml?lang=en&search_source=search_form&version=llv1&anyorall=all&safesearch=1&searchterm=mars+base&search_group=&orient=&search_cat=&searchtermx=&photographer_name=&people_gender=&people_age=&people_ethnicity=&people_number=&commercial_ok=&color=&show_color_wheel=1#id=68456515&src=8e2821a3f4c67b28492ed389ecda50a5-1-1">Jan Kaliciak </a>/Shutterstock

On Thursday, Zeke Miller did the galaxy a public service and pulled up Newt Gingrich’s 1981 bill to establish a system by which space colonies could be admitted to the Union as states. Today, he reports that not only was Gingrich’s bill—which Newt cited again in his speech on Wednesday—kind of nutty, but it also would have violated international law had it passed (and had anyone tried to colonize the moon in the name of the US of A). That’s because the Outer Space Treaty of 1967, which the US has ratified, banned any nation from laying claim to a particular piece of the intergalactic pie (or cheese).

All well and damning. But that doesn’t mean Newt’s space dreams are ruined. The former speaker, who conceded this week that the statehood-in-space idea was “the weirdest thing I’ve ever done,” has previously proposed a slightly different settlement path that would be totally legal. In his 1984 book, Window of Opportunity, Gingrich proposed creating a permanent international research base on the moon, not unlike those currently in existence on Antarctica. It would be open to the “Free World” and the “United Free World Alliance,” and would be viewed as a path to global stability and world peace:

[We] should do something in concert with al the other free people of the world to show that our joint commitment to freedom rises above nationalism; we should do something which celebrates the power of high technology that will remind us and everyone else that the greatest single factor in the rising standard of living over the last millennium was not our politicians and academic intellectuals, but rather our inventors and business entrepreneurs; we should do something which holds out an improving future to the entire Third World so that everyone can realize that our path, rather than Castro’s dictatorship, is the wave of the future; finally, we should do something which is peaceful and knowledge-oriented as a first step toward creating a Human Peace in the next millennium. The most appropriate single millennium project would be the opening in January 1, 2000 of a lunar research base for the whole free world.

Such a project, international in scope and governed in accordance with international space law as opposed to the Constitution, would be permitted by the Outer Space Treaty. Nothing about it would be all that different from the policy Gingrich proposed in Florida this week, except there would be no path to statehood—at least until President Gingrich pushes the “Everything on the Moon Belongs to America Treaty” through the United Nations.