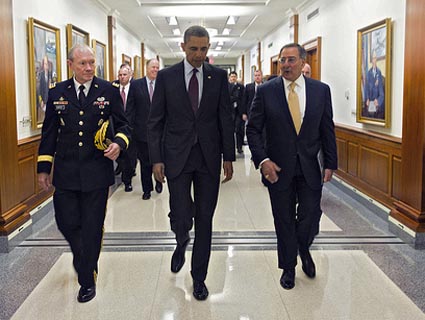 In an interview with CBS 60 Minutes‘ Scott Pelley, Secretary of Defense Leon Panetta revealed more about the secret process the Obama administration uses to kill American citizens suspected of terrorism without trial. According to Panetta, the president himself approves the decision based on recommendations from top national security officials.

“[The] President of the United States obviously reviews these cases, reviews the legal justification, and in the end says, go or no go,” Panetta said.

“So it’s the requirement of the administration under the current legal understanding that the president has to make that declaration, not you?” Pelley asked. Panetta replied, “That is correct.”

The process by which national security officials determine whether or not American citizens suspected of terrorism can be killed remains opaque. The administration has leaked information about certain targets, but it has never released the legal justification for doing so, nor has it explained the system by which members of the National Security Council reportedly decide to put an American citizen on a so-called “kill list.” In October, Reuters’ Mark Hosenball wrote that the president doesn’t necessarily explicitly approve strikes—instead, the attacks go forward unless the president objects.

Panetta’s explanation of why he believes killing an American citizen without due process is legal wasn’t exactly comforting. Here’s the exchange:

PANETTA: Without getting into the specifics of the operation, if someone is a citizen of the United States, and is a terrorist who wants to attack our people and kill Americans, in my book that person is a terrorist. And the reality is that under our laws, that person is a terrorist. And we’re required under a process of law, to be able to justify, that despite the fact that person may be a citizen, he is first and foremost a terrorist who threatens our people, and for that reason, we can establish a legal basis on which we oughta go after that individual, just as we go after bin Laden, just as we go after other terrorists. Why? Because their goal is to kill our people, and for that reason we have to defend ourselves.

PELLEY: They’re not entitled to due process of law under the Constitution of the United States? They lose their citizenship if this administration decides they’re a terrorist?

PANETTA: If this person wanted to suddenly raise questions about whether or not they’re a terrorist, and they were to return to the United States, of course they would be entitled to due process. That’s something we provide any US citizen. And for that matter frankly any terrorist who is arrested; we provide due process to that individual as well. But if a terrorist is out there on the battlefield, and the terrorist is threatening this country, that person is an enemy combatant, and when an enemy combatant holds a gun at your head, you fire back.

Panetta’s explanation isn’t much more complex than “when we say someone is a terrorist, then we can kill them, because they’re a terrorist.” The entire point of due process, however, is to determine whether or not someone is actually guilty. The defense secretary’s metaphor—that you can fire back when someone “holds a gun to your head”—might justify killing an American citizen who is fighting on an actual battlefield, like Afghanistan. But it suggests violence as an appropriate response to an imminent threat, rather than the actual circumstances under which say, radical cleric and American citizen Anwar al-Awlaki appears to have been killed.

President Obama just signed a bill that, if not for its many administrative loopholes, would “mandate” military detention for non-citizen terror suspects apprehended on American soil, so it’s not accurate for Panetta to state that “any” suspected terrorist apprehended by the US receives due process. The vast majority of the nearly two hundred detainees at Gitmo have never been charged with anything, let alone tried and convicted. Osama bin Laden was the admitted leader of a group engaged in an armed conflict against US troops in Afghanistan; concrete evidence that al-Awlaki was more than a front for extremist propaganda has never been aired.

There’s also an Orwellian element to Panetta’s argument that anyone on the US kill list should simply turn themselves in and get a fair trial. As Glenn Greenwald reminds us, we only know that al-Awlaki was on the kill list because his name was leaked to the press. Any other Americans who might be on the list have no way of knowing they’ve been targeted absent leaks from administration officials or the sound they hear right before they’re annihilated by a Hellfire missile. (Even calling friends, family, or a lawyer to turn yourself in could be the act that gets you killed.) If such an individual did know he was on the list, how exactly is he supposed to believe he’d have due process after giving himself up, given that he’s already been sentenced to death by the administration? Is a fair trial even possible under those circumstances?