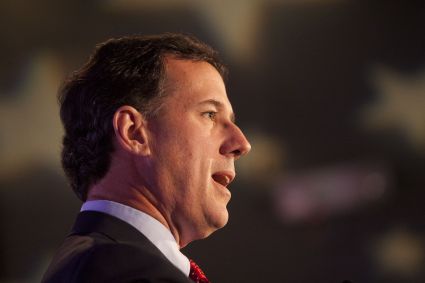 Thanks to his surprising surge, which brought him within eight votes of winning the Iowa caucuses, Rick Santorum is the candidate du jour. With his front-runner status is bound to come a new level of scrutiny directed at his track record and positions. One place to start is his stance on public education, of which the former Pennsylvania senator is not a big fan. As he said while campaigning in New Hampshire back in March, when no one was taking him seriously as a candidate: “Just call them what they are. Public schools? That’s a nice way of putting it. These are government-run schools.”

Santorum has campaigned on the fact that his seven kids have been home-schooled, which has earned him a loyal following of foot soldiers within the evangelical movement. (The same goes for Rep. Michele Bachmann, who on Tuesday dropped out of the presidential race.) Over the past year, Santorum has appeared at a handful of home-schooling conferences. In April, he won the Home School Legal Defense Association’s straw poll. There’s even a “Homeschoolers for Santorum” Facebook page.

But Santorum wasn’t always so opposed to government-run schools—especially one Pennsylvania cyber charter school that offered students free computers, internet service, and online classes. Between 2001 and 2004, that online school allowed the Santorum family to live in Virginia, while sticking Pennsylvania taxpayers with a $100,000 bill.

In 2004, Santorum spawned a minor scandal when news broke that he was no longer residing in the state that sent him to Congress and was living instead outside the Beltway in Leesburg, Virginia. Santorum owned, and still does, a house in Penn Hills, Pennsylvania, next door to his in-laws. The Santorums bought the three-bedroom house in 1997 for $87,800. But after Santorum got elected to the Senate in 1994, he bought a much larger home in Virginia that would accommodate his ever-growing family. Some relatives moved into the Penn Hills house, but Santorum continued to use it to claim residency in Pennsylvania, where he voted by absentee ballot.

Despite moving his family to Virginia, Santorum didn’t enroll his children in a local public school. Nor did the Santorums simply home-school the kids. Instead, in 2001, they enrolled five of their kids in the Pennsylvania Cyber Charter School, based out of tiny Beaver County, Pennsylvania. The school was founded by Nick Trombetta, a former wrestling coach who set up an online charter school in a depopulated part of the state and turned it into a financial powerhouse that rakes in millions annually in public education funds. (In 2007, Trombetta, a major Republican donor in the state, was the subject of a state grand jury investigation into his use of millions in public funds to build a performing arts center near the school’s headquarters, among other things. No charges have been brought.)

Considered a public school, the online charter’s students are required to take state-mandated assessments and meet other formal requirements not demanded of traditional home-schoolers. But it offers home-schoolers lots of advantages, notably free computers and internet connections. When Santorum enrolled his kids there, the local school district in Penn Hills was forced to pick up the tab for the cyber school, which cost the district $38,000 a year for the Santorum children.

After four years, the press got wind of this in 2004, and Democrats raised a fuss about the fact that their senator didn’t actually live in Pennsylvania, much less the Penn Hills school district that was footing the bills for his children’s education in Virginia. The local school board, which included a member who was the local Democratic Party committee chair, attempted to force Santorum to repay the district $100,000 in tuition.

When the scandal broke, Trombetta, the founder of the charter school, offered to let Santorum’s kids stay enrolled for free if Santorum would pay the technology costs. In the end, with Democrats challenging his residency in the state, Santorum withdrew his kids from the school. He never repaid a dime. The state ended up settling with the school district and repaying $55,000 in tuition fees. (The Santorum campaign did not respond to a request for comment.)

Even today, nearly eight years after the charter school scandal, Santorum’s residency issues continue to dog him. On the campaign trail, distancing himself from the dreaded Washington insider label, he has highlighted his Pennsylvania roots. In August, at a campaign event in Iowa, he handed out samples of “Pennsylvania Presidential Peach Preserves,” which he claimed were made by his family from peaches they picked off their trees back home. But as the Roxborough-Manayunk, Pennsylvania, Patch pointed out on Tuesday, there’s not a peach tree to be found anywhere near the Santorum home in Penn Hills. The web site speculated that the peaches must have come from elsewhere—Santorum’s $1.26 million manse in Great Falls, Virginia, perhaps.