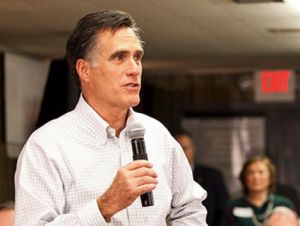 Sunday morning’s Republican debate took a turn for the sentimental and pointless when the topic turned to the candidates’ stances on gay rights.

Moderator Andy Hiller asked Mitt Romney how he’s stood up for gay rights and how he’d try to influence the GOP to support such rights. Later, Rick Santorum was asked how he would react if he had a son who came out to him as gay.

The questions were sufficiently devoid of any specific matters of gay rights that they allowed both candidates to garner applause lines. Romney said that while he opposes same-sex marriage, “if people are looking for someone who will discriminate against gays, or will in any way try and suggest that people [who] have different sexual orientation don’t have full rights in this country, they won’t find that in me.”

“When was the last time you spoke out for increasing gay rights?” Hiller asked.

Hiller followed up by asking whether Santorum would be a “force for gay rights in his party.” Santorum said he was opposed gay couples being able to adopt or get married. “Just because you don’t agree with someone’s desire to change the law doesn’t mean you don’t like them, or you hate them, or you want to discriminate against them,” Santorum said after declaring his support for laws that discriminate against gay people.

“What if you had a son who came up to you and said he was gay?” Hiller asked.

“I would love him as much as I did the second before he said it. And I would try to do everything I can to be as good of a father to him as possible.”

It was perhaps Santorum’s finest moment in the debate—he didn’t flinch, or wait a moment to reflect. He came across as entirely sincere. And that’s part of the problem. In both cases, the Republican candidates were asked questions that were essentially about whether or not they “hated” gays. Those questions are easy to deflect with a measured tone. Instead of asking the candidates about their feelings towards gay people, they could have been asked about any one of the many pending legal issues affecting the rights of gays and lesbians. Do the candidates support ending the military’s Don’t Ask Don’t Tell policy? Would they support extending the same military benefits heterosexual couples have to same-sex families? Do they think gay couples should be able to adopt (Santorum, to his credit, explicitly said no.) Do they think Lawrence v. Texas was rightly decided or do they think states should be allowed to criminalize sexual behavior by consenting adults in the privacy of their own homes? Do they support or oppose the Defense of Marriage Act, which prevents the federal government from recognizing same-sex marriages?

Many of the candidates are on record on these issues, and an informed moderator might have asked the candidates to explain their positions, since Republican stances on gay rights issues typically clash with their stated principles on federalism or individual rights. Instead, the Republican candidates got softballs about how they feel about gay people, which allowed them grin and prattle on about tolerance and equality, even while supporting laws that deny gays and lesbians the same rights as everyone else. Grading on this bizarre curve, Santorum gets applause for not casting a hypothetical gay son out of his home as though basic human decency would demand anything else. Santorum wouldn’t cast out his gay son: He just wouldn’t let him serve in the military, get married, or adopt a child.

It must be said, however, that part of the reason that Republicans can get away with saying they’re against discriminating against gays and lesbians while supporting laws that do so, is that President Barack Obama continues to oppose marriage equality. With few Democrats willing to attack the president for supporting this position, Republicans can safely argue that denying gay spouses the same rights and benefits as heterosexual ones is not “discrimination,” with little pushback from their political rivals.