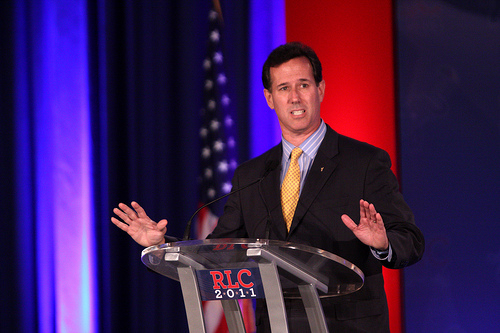 A voter in Belmont, New Hampshire asked Rick Santorum about how his climate change policies. This is, of course, an interesting question since Santorum has made it quite clear he thinks global warming is “junk science” and a ” a beautifully concocted scheme” created by the left.

The Republican presidential contender had a long, rambling answer to the question:

And I think most scientists, in fact, I assume all scientists would agree there are a variety of factors that cause the climate change. I don’t think any scientist in the world would suggest there isn’t a variety of factors, and I think the vast majority of scientists would say there’s probably a hundred factors that cause the climate to change. And so why have we decided that this one particular factor, carbon dioxide, is in fact that tip of the tail that wags the entire dog. Why from a scientific point of view do we make the assertion that this is in fact what is the case when there is a whole lot of other factors out there that could be affecting it?

So, that’s the question. Some people have very strong feelings that it is that. There are a lot of other people who don’t. Here’s the question. Let’s even assume, for purposes of argument, not that I agree with it, but for purposes of argument, that they are right. Then what would be a rational response? Well, if you have a problem and you want to craft something, what should that thing that you’re crafting do? Solve the problem. Do any of the proposed solutions put forward by Al Gore and his friends do anything to solve the problem? Even the scientists who support the theory will admit to you that it doesn’t do anything to solve the problem.

So query, why support the solution, other than you may have some other agenda that may be in place here. Right? And let’s go back to what that agenda is. There’s a common theme that you should be hearing here. They don’t trust you to allocate resources in a way that they believe is best, and so they want to have a system that forces you to do what they think you should do in running your business and your lives.

Wow, that was a lot to work with. To recap: The climate might be changing, something about a dog (why is he so obsessed with dogs?), Democrats really just want to control your life, but they’re not very good at it (see: Al Gore). That was concise.