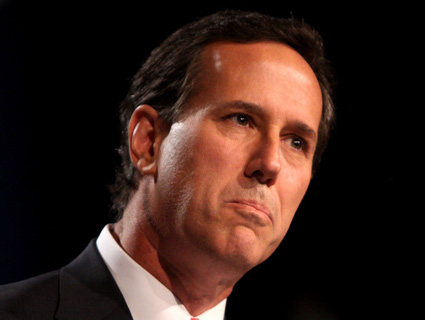 Between a morning prayer breakfast with state Republican leaders in Tallahassee and tonight’s primary debate in Jacksonville, dark-horse presidential candidate Rick Santorum stopped at a half-full auditorium at Florida State University to deliver his anti-Obama message to young conservatives. But at this hard-hit public college in a capital racked with budget woes, Santorum sidestepped the biggest issues facing the school’s students.

A small grouping of sign-carrying protesters gathered outside the student union, while even more students circulated unawares through the nearby campus Chili’s, as Santorum told the crowd of aboout 200 that the “foundational premise of America” is “the belief in God.”

After a brief exposition on the differences between France, with its guillotines, and the United States, with its freedom and vest-pocket-sized copies of the Constitution (one of which he brandished), Santorum knocked Newt Gingrich’s latest space-colonization plan and said the former House speaker “wants to spend money like Obama.” He added: “The idea that anybody’s going out and talking about grand new very expensive schemes to spend more money at a time when we do not have our fiscal house in order, in my opinion, is plain crass politics.”

Speaking at one of the state’s premier public universities—rocked by fiscal shortfalls and a Republican-dominated state government that’s gutted the humanities—Santorum’s message on education was notably different than just one day prior. “It’s no wonder President Obama wants every kid to go to college,” he said at a Baptist church downstate in Naples on Wednesday. “The indoctrination that occurs in American universities is one of the keys to the left holding and maintaining power in America. And it is indoctrination.” He added:

There was none of that talk Thursday at Florida State. Perhaps Santorum hadn’t heard about about the tradition of conservative giving at FSU, where the cash-strapped trustees have endowed two professorships with Koch brothers money, built a career center with cash from corporate raider Al “Chainsaw” Dunlap, and named at least two buildings after DeVoe Moore, a legendary local tea party millionaire and antique American car collector.

Here at FSU, Santorum wrapped up a lethargic Q-and-A session by sporting a Seminoles hat as he trudged off the sparse podium. He never addressed his connection to a controversial South Florida pastor who famously said homosexuality “makes God want to vomit.” Nor was he glitter-bombed, as a fast-moving student rumor suggested might happen Thursday morning.

After he was gone, several liberal campus organizers moved through to pass out flyers for a “Rally in Tally,” an event also happening in the capital Thursday. Thousands of students from Florida’s public universities planned to converge in Tallahassee to protest tuition hikes and further cuts to state education spending. Santorum hadn’t mentioned those issues, either, before departing the campus. There was a TV debate to go prep for.