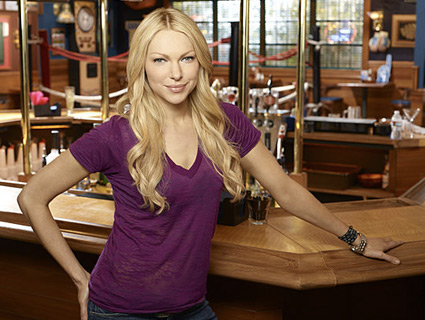 Laura Prepon on the soon-to-be-vacant set of "Are You There, Chelsea?"Photo courtesy of <a href="http://www.nbc.com/are-you-there-chelsea/photos/sneak-peek/7706#item=173967">NBC</a>

If Are You There, Chelsea? were a song, it would probably be “Miracles” by Jefferson Starship—tiresome, lacking any sense of direction, and difficult to endure without a CamelBak full of absinthe. The new NBC sitcom—a midseason replacement that premieres Wednesday, January 11 at 8:30 p.m. EST—tries everything it can to be prime-time edgy. Unfortunately, the attempts at rowdy, off-kilter humor rapidly degenerate into an embarrassing mess.

In the voice-over-narrated opening moments of the pilot episode, the show makes it clear right off the bat that central character Chelsea Newman (played by Laura Prepon, of That ’70s Show fame) likes to drink—a lot and often. Her crowning achievement in life is successfully “power-slurping the worm out of a high-end bottle of tequila,” and she literally prays to the deity “Vodka.” She makes key life decisions based on her proximity to the bar. And she drives drunk, too! And she doesn’t learn her lesson even after spending a night in jail that involves some tense girl-on-girl lip-locking between cellmates.

All of this happens in the first couple of minutes of the pilot, and what follows is more canned laughter and more flat raunch. NBC, which really tried to bring the sizzle and provocativeness this past fall with their hollow soap opera The Playboy Club (the network ended up pulling the plug after three episodes), is still halfheartedly pushing the proverbial envelope. Chelsea is loosely based on the 2008 book Are You There, Vodka? It’s Me, Chelsea by foul-mouthed comedienne Chelsea Handler (who stars as fictional Chelsea’s moralizing big sister), so the politically incorrect jabs and female promiscuity come prepackaged.

The series kicks off as a compendium of party girl/faux-feminism clichés. Our leading lady devotes an entire monologue to the off-putting pubes on gingers. Her roommate and best friend, the struggling journalist Olivia (Ali Wong), is a whiny, bespectacled Korean twentysomething who enjoys talking about gettin’ it on with black men. Chelsea’s other roommate (Lauren Lapkus) is an inexplicably awkward, virginal, pale white girl. And her father (the astoundingly mediocre Lenny Clarke) is a neglectful cheapskate with woefully bad comic timing.

Judging from the first two episodes, this new sitcom will quickly fold under a Niagara of glaring problems. The acting is uniformly wooden, the sex fiends and booze hounds are dull and unsympathetic, the one-liners are painfully stale, and the show’s tastelessness is never quite in-your-face.

But the real issue with Chelsea is that it’s the latest—and most blatant—offender in a recent slew of TV series that gleefully emphasize the most useless, unattractive stereotypes about American women. Fox’s New Girl has (the usually wonderful) Zooey Deschanel constantly blurring the line between quirky charm and “somebody please get that girl an expensive psychiatrist.” 2 Broke Girls on CBS has been charged repeatedly with being a crass parade of ethnic and gender insensitivity. And Whitney—also on NBC—leans heavily on the whole “I’m an offbeat modern woman with an aversion to commitment and happiness and sobriety” trope.

The problem isn’t just that these shows are sexist (more on that); it’s also that they can’t be bothered to be the least bit creative about it. In the case of Chelsea, the writers seem incapable of tempering the show’s mean streak long enough to make you love (or love to hate) its dissipated protagonist. The show confuses wit and burlesque with casual hostility and tame lechery, and the strict taxonomy of women as either whores or prudes gets old by the time yesterday arrives.

TV comedy writers are perfectly capable of writing interesting female characters, even ones who are pegged to stereotypes involving deep vulnerability, sexual objectification, or self-destructive behavior. But to pull that off takes nuance, guts, and cleverness. Are You There, Chelsea? is only the most recent reminder that there’s a severe deficit in all three in today’s network lineups.