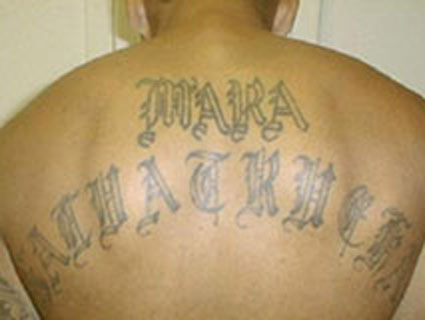 An MS-13 gang member with the gang's full name tattooed on his back.<a href="http://commons.wikimedia.org/wiki/File:Marasalvatrucha13.png">Federal Bureau of Investigation</a>/Wikimedia Commons

At Thursday’s GOP presidential debate in Jacksonville, Newt Gingrich was asked early on about his position on illegal immigration. Although he defended his proposal that senior citizens and families who have been here for a long time should be allowed to stay, Gingrich took a harsh stand on everyone else. “Look, I think, first of all, we need to control the border, which—I would finish the border fence by 2014…We should also make deportation easier, so that when we deport people who shouldn’t be here, MS-13, for example, it should be very quick.”

MS-13, for the uninitiated, is a Central-American gang with a large presence in the United States. Newt has cited the group with regularity on the campaign trail. Conflating undocumented immigrants with violent criminal activity is hardly a new concept. But Newt’s MS-13 line is missing one key fact—mass deportations are the reason the gang has grown like it has in the United States. Well-intentioned American policies created a cycle by which gang members would return to El Salvador and recruit new members, who in turn travel to the United States themselves. The Los Angeles Times examined the issue in a great 2005 investigation. Here’s the thrust of it:

In the last 12 years, U.S. immigration authorities have logged more than 50,000 deportations of immigrants with criminal records to Central America, including untold numbers of gang members like Cruz-Mendoza.

But a deportation policy aimed in part at breaking up a Los Angeles street gang has backfired and helped spread it across Central America and back into other parts of the United States. Newly organized cells in El Salvador have returned to establish strongholds in metropolitan Washington, D.C., and other U.S. cities. Prisons in El Salvador have become nerve centers, authorities say, where deported leaders from Los Angeles communicate with gang cliques across the United States.

A gang that once numbered a few thousand and was involved in street violence and turf battles has morphed into an international network with as many as 50,000 members, the most hard-core engaging in extortion, immigrant smuggling and racketeering. In the last year, the federal government has brought racketeering cases against MS-13 members in Long Island, N.Y., and southern Maryland.