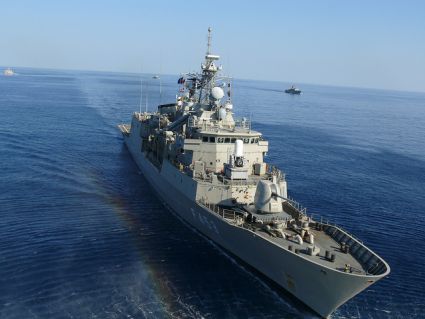 The basics: Iran and the United States appear to be heading for a showdown in the Persian Gulf. Amid already-high tensions over Iran’s advancing nuclear program, the US has imposed harsh new economic sanctions on the regime in Tehran. The sanctions have throttled Iran’s economy, and the country has responded by threatening to shut down the Gulf to all shipping traffic. Iranian officials have also threatened military action against the United States and its allies in the region if they don’t back off. Two US aircraft carriers are en route to the region.

How has the situation escalated? Over New Year’s weekend, the Iranians announced that they’d made their first-ever nuclear fuel rods, potentially a major step forward in building a nuclear bomb.* Then they test-fired three anti-ship missiles in the Strait of Hormuz, a 34-mile-wide choke point in the Persian Gulf through which approximately 20 percent of the world’s crude oil is transported. An Iranian admiral told state TV that the shots were a warning to America: “The control of the Strait of Hormuz is completely under our authority [too],” he said, warning that Iran would attack “any enemy” that endangered Iranian interests. In response, the US has sent two aircraft carriers steaming toward the Gulf to replace the USS John C. Stennis, which just ended its own Mideast deployment. “Iran advises, recommends and warns them [the US] not to move its carrier back to the previous area in the Gulf because Iran is not used to repeating its warnings and warns just once,” a general told state media.

Will Iran actually shut down the Strait? It doesn’t seem likely. While Iran could certainly cause problems, closing down the Strait would in fact be difficult for it to do. According to Reuters, “Iran would not be able to sustain a line of ships to block the Strait because it mainly has smaller boats that do not have the ability to stay in open waters in a coordinated formation for days.” Meanwhile, both Iran’s Revolutionary Guard and Navy have since backtracked on the threat. Mahmoud Mousavi, a Deputy Commander in the Iranian Navy, told state media Sunday that Iran “does not intend to impede maritime shipping in the area.” Threats to close the Strait are also nothing new; Iranian officials for years have claimed that they would shut down the Strait (it’s never happened). As Ahmad Bakhshayesh Ardestani, a candidate for Iran’s parliament, told the Washington Post: “Our threat will not be realized. We are just responding to the US, nothing more.”

How does this affect me? Expect the price of gas to stay high. Crude oil futures jumped significantly Tuesday on international jitters over the brinkmanship, and some analysts are predicting that even a short Gulf blockade could send the cost of a barrel of crude over $150, a 40 percent spike from current levels. “The ever-growing frequency of intense sabre-rattling and muscle flexing between Iran and the US should keep the markets jittery and vulnerable to sudden price jumps,” market analyst JBC Energy reported Tuesday. Volatility in prices could get even worse in light of zero spare capacity among big oil producers such as Saudi Arabia.

Do the tensions involve those mysterious explosions in Iran lately? Possibly. In recent months, there have been three mysterious explosions at factories and warehouses across the country. Seventeen Iranian soldiers were reportedly killed by a blast at an ammunition depot outside Tehran in mid-November; that facility was run by the nation’s Revolutionary Guards, who have been implicated in uranium enrichment for nuclear weapons production. Later that month, a series of explosions leveled a key nuclear site in Isfahan, and anonymous Israeli sources disputed the Iranian explanation that it was an accident. And in December, seven people, including several foreigners, were killed when discarded ammunition reportedly exploded at a scrap-metal plant in Yazd. The blasts—in addition to the untimely deaths of three leading Iranian nuclear scientists in the past two years, and a devastating cyberattack on Iran’s nuclear facilities—have led some analysts to believe that the United States and its allies are already deep into a covert war against the rogue state.

Don’t we already have sanctions on Iran? Yes—and under Obama, they’re harsher than they’ve been in decades. Over New Year’s weekend he signed a defense-spending bill with an amendment that effectively freezes international deals with Iran’s Central Bank. If successful, it would halt much of Iran’s oil sales and further destabilize its currency. It would also hurt European trade and likely cause global oil prices to soar. The threat posed by the amendment may help explain why Iran ratcheted up its rhetoric over the weekend. The White House had strongly opposed the legislation despite bipartisan support for it in Congress, but Obama went on to sign the bill anyway. Why? Apart from the fact that defense spending isn’t really optional, the politics of the situation didn’t seem to favor the White House. As Sen. Mark Kirk (R-Ill.), one of the amendment’s sponsors, put it, “[A]s you enter a presidential contest, there’s no upside to being soft on Iran.”

Haven’t we been through this before? Sort of. During the Iran-Iraq war in the 1980s, both countries targeted the other’s oil-tanker traffic in the Persian Gulf with missiles and mines. Starting in 1987, the US stepped into these “tanker wars” to protect oil shipments bound for the United States (or sold by US-based companies). During Operation Earnest Will and Operation Prime Chance, American naval ships protected convoys and kept the Iranians and Iraqis at bay. The global community had good reason to be on edge: During these operations, an American cruiser, the USS Vincennes, mistook an Iranian airliner for an incoming missile and shot it down, killing all 290 passengers. The engagement’s only US fatalities resulted from an unprovoked air-to-surface missile attack on the USS Stark, which killed 37 sailors. But the shooter wasn’t Iranian; he was Iraqi.

What’s different this time around? The United States has a much bigger strategic presence in the Middle East, and a lot of new military capabilities that weren’t around in 1987. The Navy’s 5th Fleet operates out of Bahrain, just 150 miles from Iran. The Navy has better-developed countermeasures for threats from mines and missiles. And our special operations capabilities are much more robust; remember that little 2011 operation in a Pakistani town called Abbottabad? Backed up by special boat units and mobile inshore underwater warfare units, the SEALs are even more effective at sea than they are in the middle of South Asia. In addition, the US hopes Middle East allies (and Iran rivals), like Saudi Arabia, will help deter Iran. To that end, the United States recently awarded a $15 billion arms contract to Saudi Arabia.

How might the White House respond to Iranian provocation? Given all these factors—as well as President Obama’s previous eagerness to flex military muscle in Afghanistan, Pakistan, Yemen, Libya, and elsewhere—there’s little question that the White House could mount an effective naval operation to protect Gulf shipping while keeping tensions at a simmer. Or the president might use that capability, and Iranian histrionics, to take a case for further harsh sanctions against Iran to the United Nations…which would likely require enforcement by US-led naval and air forces. Or Obama could simply open new talks with Iran through diplomatic back channels. That’s likely to happen in any case—but if that’s all that happens in the wake of Iran’s latest threats, expect tough-talking GOP presidential candidates to fire away mercilessly at the White House.

Another Mideast war for oil? Really? With tensions on the rise, whether Washington will move toward another protracted military engagement over petroleum in the Middle East is a fair question. It could be that Obama is a progressive president who’s been mugged by realpolitik. Or it could be that the GOP field, in painting Obama as soft on Iran, is succeeding in pushing the White House to the right on this foreign policy problem. Israel is certainly working hard to exert pressure, particularly via its GOP allies in Congress. The Iranian regime is aware of these pressures, and is happy to stoke them when the United States is at its most vulnerable: heading into the heart of a presidential election cycle. Iran, too, is in an election year—and a confrontation with the US could benefit hardline incumbents at a time when many Iranians are otherwise disaffected with the regime’s handling of the economy. America’s Iran-bashing conservatives, then, play to the Tehran regime’s desire to distract its own people from the country’s domestic problems. But whether the brinkmanship over Gulf oil will lead to real military conflict remains unknown for now.

*We revised the original sentence to more accurately reflect that fuel rods could lead to greater weapons building capability, but don’t necessarily get the Iranians closer to obtaining the bomb. Update, Jan. 5: According to a former IAEA official writing in the Guardian on Thursday, building fuel rods “is proscribed by the United Nations Security Council due to its proliferation concerns. Plutonium could be separated from the reactor’s spent fuel. Hence this show of ostensibly civilian nuclear progress could end up further stoking international tensions.”