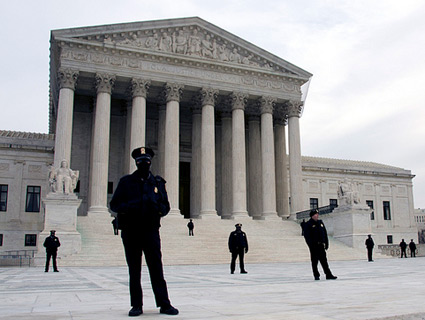 Now Roberts and the court’s conservative majority have another chance to crush government efforts to alleviate racial inequities. On Tuesday, the court decided to hear the case of Abigail Fisher, who claims the University of Texas’ admissions policy discriminated against her as a white person.

“Even right-wingers get nervous with racial homogeneity,” Kennedy argues. “Why do you think they loved Herman Cain so much? If Patrick Buchanan were elected president of the United States, there would have been a person of color in the cabinet.”

Previous efforts to curtail what are known as “race-conscious” policies have shown that “universities don’t just throw up their hands and give up on racial diversity,” says Rick Kahlenberg, an education expert at the Century Foundation. “They look to race-neutral alternatives, some of which can produce substantial racial and ethnic diversity.”

Kahlenberg points to Texas’ “Top Ten Percent Law,” which all but guarantees admission to the University of Texas–Austin (the network’s flagship campus) for students in the top 10 percent of their high school graduating class. Top Ten Percent was more successful in increasing diversity than the race-conscious policy it replaced, but black and Latino kids in the second and third deciles of their high school classes had a harder time getting in. Meanwhile, admission rates for white and Asian American kids increased.

After the Supreme Court (with Justice Sandra Day O’Connor providing the swing vote) upheld affirmative action policies in 2003, UT-Austin shifted to a system where Top Ten Percent students still make up 75 percent of admissions, while the other 25 percent are admitted under a process that considers race, socioeconomic status, and other factors. This approach has been slightly more successful in increasing minority enrollment, and it’s the target of Fisher’s lawsuit.

Despite the reinstatement of race-conscious admissions, blacks and Latinos are still hugely underrepresented in Texas’ top schools. The two groups made up more than half of Texas’ college-age population in 2000. That’s why the 5th Circuit, in its ruling last year in the Fisher case, wrote that by itself, “the Top Ten Percent Law…is at best a blunt tool for securing the educational benefits that diversity is intended to achieve.” The 5th Circuit ruling, however, isn’t expected to survive in the Supreme Court.

“Just nine years ago the justices held that public universities could use race as a factor in admissions,” says Adam Winkler, a professor at the University of California–Los Angeles Law School. “One thing has changed: the personnel on the Supreme Court. Since the addition of Chief Justice John Roberts and Justice Samuel Alito, the Court has shifted decidedly to the right and voiced new hostility to government uses of race.” Although broad inequities in education have persisted, affirmative action may be a harder sell in a country with a black president in which half of white people believe they face as much racial discrimination as black Americans. Justice Elena Kagan has recused herself, leaving the Republican appointees on the court with a decisive edge in numbers.

The high court might not kill affirmative action outright. Justice Anthony Kennedy, who sided with the conservative wing of the court last time around and dissented from O’Connor’s 2003 ruling, nevertheless wrote that race could be considered as a “last resort.” But even if the court disregards decades of legal precedent and substantially curtails affirmative action, schools won’t cease efforts to facilitate diversity. Whatever it evolves into however, probably won’t be as effective in helping underrepresented minorities get access to higher education—at least not for the foreseeable future.