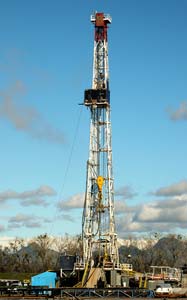 Gas well drilling in Sutter/Colusa County, California CalWest/FlickrThere isn’t supposed to be much fracking in California. In the past, the state’s Division of Oil, Gas, and Geothermal Resources (DOGGR) has said that it “does not believe that fracking is widely used” in the state. More recently, the division allowed that the practice is “used for a brief period to stimulate production of oil and gas wells,” but added (PDF) that “the division doesn’t believe the practice is nearly as widespread as it is in the Eastern U.S. for shale gas production.”

Californians, then, should be able to breathe a sigh of relief, since the controversial practice of fracking, short for hydraulic fracturing, has been linked to a host of environmental problems, including air pollution, groundwater contamination, and possibly even earthquakes.

But according to a report (PDF) just released by the Environmental Working Group, fracking is much more common in California than the regulators would like you to believe. A team of EWG investigators has unearthed dozens of industry documents and academic papers indicating that the practice has been going on in at least six California counties for 60 years or more. And evidence suggests that it’s still going strong: “We asked Halliburton, ‘What percentage of wells are you fracking in Kern County, for example?,'” says Bill Allayud, EWG’s California Director of Governmental Affairs. “And they said 50 to 60 percent of oil wells.” A 2008 paper by the Halliburton subsidiary Pinnacle Technologies detailed the widespread current use of fracking in California.

The DOGGR didn’t respond to the multiple emails I sent asking for comment, and EWG says that in a meeting earlier this month, division officials claimed again that it did not have any information about fracking in California. But the really strange thing is that the practice is clearly on the agency’s mind: In 2010, the DOGGR requested funding to broaden its regulatory program to include new oil extraction technologies like fracking. It received more than $3.2 million for that very purpose in its 2010-11 budget, but according to the EWG report, so far it has not used the funds to regulate fracking. “They told us that regulating fracking is not on their plate,” Allayud says. “Until they see manifest harm, they won’t act.”