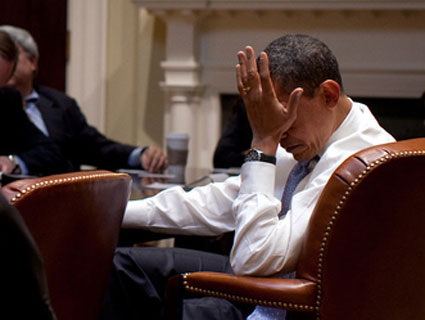 President Barack Obama’s decision to require most employers to cover birth control and insurers to offer it at no cost has created a firestorm of controversy. But the central mandate—that most employers have to cover preventative care for women—has been law for over a decade. This point has been completely lost in the current controversy, as Republican presidential candidates and social conservatives claim that Obama has launched a war on religious liberty and the Catholic Church.

Despite the longstanding precedent, “no one screamed” until now, said Sara Rosenbaum, a health law expert at George Washington University.

In December 2000, the Equal Employment Opportunity Commission ruled that companies that provided prescription drugs to their employees but didn’t provide birth control were in violation of Title VII of the 1964 Civil Rights Act, which prevents discrimination on the basis of sex. That opinion, which the George W. Bush administration did nothing to alter or withdraw when it took office the next month, is still in effect today—and because it relies on Title VII of the Civil Rights Act, it applies to all employers with 15 or more employees. Employers that don’t offer prescription coverage or don’t offer insurance at all are exempt, because they treat men and women equally—but under the EEOC’s interpretation of the law, you can’t offer other preventative care coverage without offering birth control coverage, too.

“It was, we thought at the time, a fairly straightforward application of Title VII principles,” a top former EEOC official who was involved in the decision told Mother Jones. “All of these plans covered Viagra immediately, without thinking, and they were still declining to cover prescription contraceptives. It’s a little bit jaw-dropping to see what is going on now…There was some press at the time but we issued guidances that were far, far more controversial.”

After the EEOC opinion was approved in 2000, reproductive rights groups and employees who wanted birth control access sued employers that refused to comply. The next year, in Erickson v. Bartell Drug Co., a federal court agreed with the EEOC’s reasoning. Reproductive rights groups and others used that decision as leverage to force other companies to settle lawsuits and agree to change their insurance plans to include birth control. Some subsequent court decisions echoed Erickson, and some went the other way, but the rule (absent a Supreme Court decision) remained, and over the following decade, the percentage of employer-based plans offering contraceptive coverage tripled to 90 percent.

“We have used [the EEOC ruling] many times in negotiating with various employers,” says Judy Waxman, the vice president for health and reproductive rights at the National Women’s Law Center. “It has been in active use all this time. [President Obama’s] policy is only new in the sense that it covers employers with less than 15 employees and with no copay for the individual. The basic rule has been in place since 2000.”

Not even religious employers were exempt from the impact of the EEOC decision. Although Title VII allows religious institutions to discriminate on religious grounds, it doesn’t allow them to discriminate on the basis of sex—the kind of discrimination at issue in the EEOC ruling. DePaul University, the largest Roman Catholic university in America, added birth control coverage to its plans after receiving an EEOC complaint several years ago. (DePaul officials did not respond to a request for comment.)

As recently as last year, the EEOC was moderating a dispute between the administrators of Belmont Abbey, a Catholic institution in North Carolina, and several of its employees who had their birth control coverage withdrawn after administrators realized it was being offered. The Weekly Standard opined on the issue in 2009—more proof that religious employers were being asked to cover contraception far before the Obama administration issued its new rule on January 20 of this year.

“The current freakout,” Judy Waxman says, is largely occurring because the EEOC policy “isn’t as widely known…and it hasn’t been uniformly enforced.” But it’s still unclear whether Obama’s Health and Human Services department will enforce the new rule any more harshly than the old one. The administration has already given organizations a year-long grace period to comply. Asked to explain how the agency would make employers do what it wanted, an HHS official told Mother Jones that it would “enforce this the same way we enforce everything else in the law.”