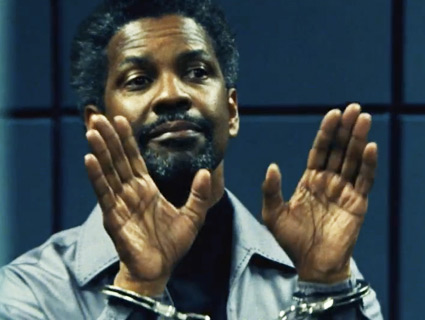 Let me start by saying how relieved I am to see a Denzel Washington action film that has nothing to do with imperiled trains and wasn’t directed by Tony Scott. It was also nice to see Washington play another charismatic, streetwise ass-kicker who gets his jollies up bullying a white-boy rookie—a formula Washington hasn’t worked so well since 2001’s Training Day.

That said, Safe House is a glut of miserably squandered opportunities.

Washington stars as Tobin Frost, a former high-ranking CIA official now wanted on four continents for selling agency secrets to Iran, China, Russia, and so forth. Just how badass is this character? We learn early on that he “literally rewrote the book” on CIA interrogation and personally convinced a top Hezbollah leader to become an informant during the Lebanese Civil War. Anyway, after finally falling into US custody, Frost is rushed to a black site in Cape Town, where relative newbie Matt Weston (Ryan Reynolds) is waiting as a CIA “housesitter”—a job marked by long hours, crushing idleness, and, as one minor character puts it, “appalling remuneration.”

Shortly after Weston’s superiors begin waterboarding Frost, a gang of nameless thugs flourishing automatic weapons bust into the safe house, presumably to extract the high-value detainee alive. Suddenly, Weston and Frost are off on a mad dash to the next secure location, racing through the busy streets and shanty towns of South Africa in a blitz of gunfire, civilian casualties, and crashed getaway cars.

With a story so resoundingly familiar, viewers would be foolish to expect any thematic or narrative surprises. The problem with Safe House isn’t its cookie-cutter plotline; it’s the fact that the movie can’t seem to juice it for the manic thrills or dark grit that it’s worth. The shoot-outs and close-quarters knife fights quickly blur into Xerox copies of one another, mixing hand-held camerawork and lazily staged set pieces in what amounts to dampened, detached carnage. Basically, stuff blows up, necks are swiftly broken, bullets whiz, and bodies pile up accordingly—but there’s no spark, and nothing to make the shoot-’em-up sequences any more memorable than the last time you played multiplayer on Modern Warfare 3.

The film works best when its star talent takes over; it’s tough to resist Washington’s flashes of smirking menace or his knack for turning bland dialogue into tension-rich moments. But such moments are few and far between, as too much of the movie is dedicated to Weston and the disposable subplots that come along with him. Though Reynolds does turn in a convincing, tightly coiled portrayal of a young agent trying to prove his mettle, that hardly compensates for the humdrum, underdeveloped nature of his character. It also doesn’t help that Safe House won’t allow Washington any of the edge afforded to him by comparable past roles: his vulgar charm in Training Day, the larger-than-life qualities in American Gangster, or the bloodlust delirium of Man on Fire.

The rest of the film’s considerable acting talent is wasted on supporting roles that require little more than looking anxious while standing in a crowded government control room. For instance, the stellar, Oscar-nominated Vera Farmiga is relegated to an extended cameo—you have to keep reminding yourself that she’s even in the picture.

In the end, Safe House simply cannot decide what kind of movie it wants to be. Just when you think it’s shaping up to be a pitiless, bare-knuckled thriller, it slams on the brakes to offer up cliché-perforated meditation on remorse and individual responsibility. By the time the back-to-back plot twists arrive, there’s barely time left in the film for viewers to give half a damn. And the rushed, uneven narrative is exacerbated by sloppily introduced, pro-whistleblower politics—something more likely to inspire groans than provoke thought or excite.

Safe House gets a wide release on Friday February 10. Click here for local showtimes and tickets.